With the back feeling better i again ventured out into the night for opossum shots, I had an image in mind which is always a good start, I wanted the opossum to be standing beside the tree looking at me, Now you do not see opossums standing up as they walk around on all fours so how to get it up on its back legs, Well it was quite easy, I put a very small amount of food next to the tree where it normally feeds, I then squashed a few pieces of dog food into the bark up to about opossum eye level, I hoped that it would smell the food and raise up, After a couple of hours an opossum came out and up to the feeding area, I watched through the viewfinder as it fed and then once the food had gone started to sniff around and found the food up the tree, I stupidly hit the focus button and the camera hunted in the low light and i only got focus back after the opossum had dropped down and moved off, The camera would snap into focus on the tree but the opossum just did not have enough contrast for the focus system to grab, I was feeling pretty stupid as i had focused on the tree where the food was and using F11 the chances are that the opossum would have been in focus, I refocused and noticed that most of the food was still squashed into the bark, I sat for another 30 minutes and then decided as i was getting a stiff back to come in, I just got outside the camo netting when i noticed another opossum coming out of the woodland at the end of the garden, This one was very dark and obviously different from the other one, I crept back slowly to the camera and knelt down and waited, The opossum was very shy, I went to the second feeding area and with nothing their came towards where the bait was but stopped half way as it looked at the tripod with the flashgun on it, It circled back and made a huge circle of the area before coming to the baited tree, It smell around and then reared up to get the bait, I waited and made a small noise in hopes of not scaring it away but to make it glance over, It didnt so i grabbed the shot and it high tailed it out of the area and back into the woods, I quickly grabbed my gear and packed up, Putting more bait out and left, I was quite chuffed as the plan had pretty much worked and i finally had nailed the exposure. 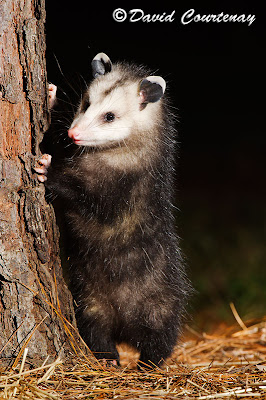 Email ThisBlogThis!Share to TwitterShare to FacebookShare to Pinterest
Labels: opossum.