In Part 1, I mentioned I went to Bradgate Park in Leicestershire to get some images of the rut.

Well getting there in the early dawn about 15 minutes before the car park was meant to open, I noticed a good few cars already there and took myself into the park. As I got near to the entrance, the calls of the Red Deer stags was loud and coming from a number of directions.

Within 25 metres of being in the park, I was aware of young stags to my left, right and ahead of me. All of them calling, and eyeing me nervously and suspiciously, while checking on their numerous hinds.

As I walked gently through the middle of them, I felt quite vulnerable, particularly as one of the more inquisitive ones started to come towards me. Extending one of the tripod legs gave me a little bit of false confidence if needed, but it was a nervous couple of minutes for me until I was clear of them.

Moving up the road towards Lady Jane Grey's ruined house, I was aware of a number of Fallow deer to my left and right, but at this stage, it was still quite dark.

As I walked further into the park, and the light improved, I came across my first Stag with a group of hinds that was busy seeing off a younger suitor.

These images below were of the senior Stag.

The first four images were taken in a burst of four showing him going through his roar. These were taken with the 5Dmk2 and 500 on the tripod. The second two were with the animal further away, so I just switched bodies and used the 7D for these.

Instead of using the tele-converter, I wanted to keep the full f4 speed of the 500 available to me, and switch between the Full frame and 1.6 crop bodies to act as my distance adjustment. It worked quite well and was surprising quick and easy to do. This is the big advantage of setting up both cameras in identical modes using the C1 to C3 custom pre-set dials. 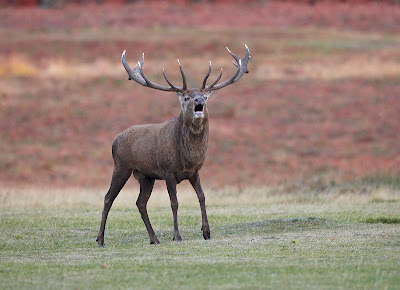 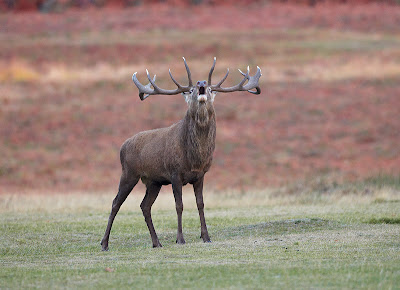 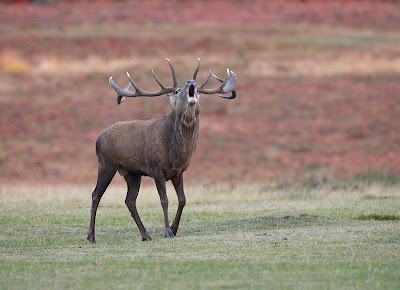 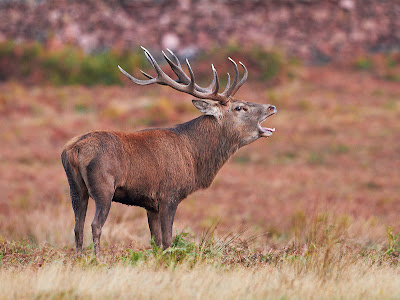 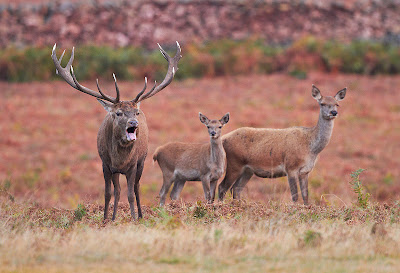 In the last image, I wanted to show more than just a specimen stag and depict the hinds as well looking on as their brave stag roared at the retreating suitor stag.

It was a wonderful experience. The light didn't work as well as I wanted - no wonderful backlit shots, no steam as they bellowed in the cold crisp air. It was too warm, and at 8am towards the end of October I was still in short shirtsleeves. And of course, no wonderful Scottish mountains to be seen either.

Nevertheless, it was a wonderful experience.

Back next time with Fallow deer and a few bonus birds from the trip as well.
Martin
Posted by WPATW at 05:00