Well the weather was very wet and the light poor for Day 2 which put some limitations on the photography options.
Nevertheless the wildlife was still out and I had some great spots today, starting with Treecreeper in the garden at Pam and Arthur Browns (of Discover Mull) garden. Locally in Dervaig Oystercatcher, Redshank, Curlew and Greylag Geese were in abundance. On the north west corner of the island at Calgary Bay, a couple of juvenile White Tailed Sea Eagles were hanging on the strong wind above the cliffs. As juveniles, they have not yet developed their distinctive white tail plumage. A couple of Ravens were not too impressed with their presence and flew at them shouting with their characteristic croaking calls.

A bit further round the coast and towards Loch Na Keal, a Dipper was seen at Eas Falls splashing around looking for food.

Near Ulva Ferry, the Golden Eagle I reported from Day 1 was seen again, and again being aerial bombarded by a very ambitious little Kestrel, which looked like a tiny dot by comparison with the massive wingspan of the Eagle.

Best spot of the day was a male Merlin who got under near me and flew off at great speed. 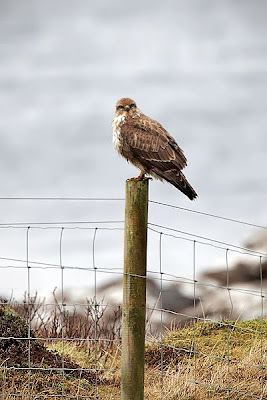 With the heavy rain of Day 2, the buzzards were pushed down and sitting on the wires or telegraph poles.

On the more sheltered bay of Salen and Aros, there were a number of divers, Great Northern and Red Throated, Black Guillemot and Common Seal. More Red Breasted Merganser were around along with Goosander which was sieving the surface of the water with it's sawbill, and also a male and two female Goldeneye were present. I usually come to Mull in May when these last two species have moved on so it was good to see them.

Well the weather didn't really get any better for Day 3- occasional dry but grey spells in between heavier rain or drizzle.

I covered the same loop of the north of the island again today, but saw a lot more. A total of 48 birds and 4 mammal species. Highlights of the day were many, but I guess it would be the Male Hen Harrier hunting, the two Golden Eagles, particularly the second one that was being heavily mobbed by a Raven and the two juvenile White Tail Sea Eagles. 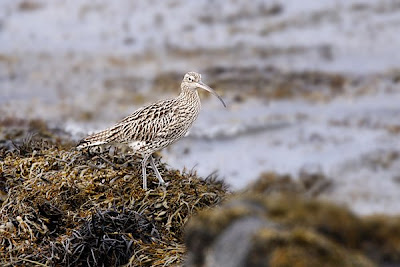 I also had great views of more Goldeneye again as well as Turnstone, Ringed Plover, Curlew again and some close ups of a couple of flocks of Skylarks.

I have been trying out a Canon 50D while I am here alongside my own 1Dmk3. Well I missed focus a few times today as I cannot switch back button focus from the AF to the * button - so a few swear words hit the Mull air. It is too early to tell what the image quality is like with this uncalibrated screen or on the other laptop. I will update the blog when I have had a good look on the big screen at home and let you know my findings. I certainly like the new rear screens on the latest breed of Canon cameras - very sharp.

Hopefully the weather will be better here tomorrow and I can get some more images, as the light today was again pretty poor and the images I have posted reflect that, sadly.