It is cold, grey and the wind is biting as I type this on Sunday morning, although the Sparrowhawk that has gone flashing across the back of the garden seemed quite oblivious to it. A couple of new visitors of note in the last two weeks have been a pair of Great Spotted Woodpeckers coming in, ignoring the many options of feed and pecking away on the dead branch on the apple tree.
I spent a couple of hours out in the garden yesterday putting in hedging. This is the time of year to put in bare root hedge stock while the growth is dormant. I have put in a total of 80 plants, all of mixed native UK species with berry, flower and fruit variety for wildlife from nine different species. It will be exciting to watch them grow this year and put some cover against a very boring wooden fence that one of our neighbours has put up.

Since I last wrote, we have generally had more of the same species in, with the blackbirds and sparrows being the dominant species in terms of numbers. Our Grey Wagtail didn't show for a few days, so we always get a little nervous in case it has been 'catted', but it put in an appearrance again on Friday and Saturday. I still need to get some better images yet. 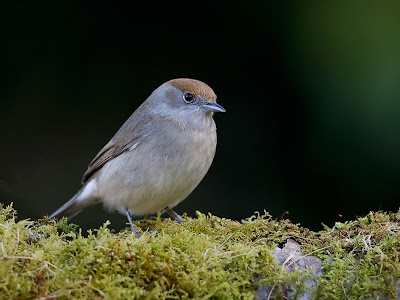 Still hoping for Blackcap and Bramblings to come back as we had last year, but nothing yet. But I thought I would show you what we are missing this year 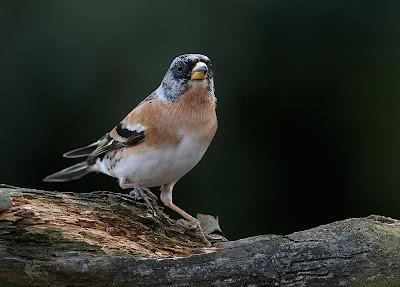 In the local area, we have had massive flocks of Fieldfare and Redwing, both of which avoided me when I went out trying to photograph them yesterday. I found a great location earlier in the week and was hoping to be able to get them yesterday - but they had all moved to a different location that was too far away to photograph. Sods Law!! There is plenty of buzzard activity and I saw a great sight two Monday's ago on my drive to work after we had some very early heavy rain. In one field there were eleven buzzards on the ground in a ploughed field, and a further seven in the adjacent field. the heavy rain had obviously bought all the worms to the surface for a buzzard breakfast. I have only seen this sort of behaviour once before, which was last year when I was in Switzerland with Dave, and it was again similar weather conditions that caused it.

Slightly further off patch, there have been reports of good numbers of Waxwings. I have tried the nearest location a couple of times, but have not had a sighting.

I also keep an eye on the wildlife where I work, in particular the Great Crested Grebes on the lake we have there. Last year one pair decided to nest on a small patch of reeds immediately underneath an area where there was a footpath. Unfortunately, due to disturbance, their first attempt failed, but the second try was successful, although with only a single chick fledging. As part of major bank maintenance, in which there home needs to be completely rebuilt at the wrong time of the year as far as they are concerned. So they have been given a brand new floating island, pre-planted with phragmites reeds that has been placed in the middle of the area they occupy. So hopefully they will have a good chance of undisturbed nesting this year.

If you have any unusual sightings from your local patch, we would love to hear from you. Just drop a note in the comments.

Update: After I had finished writing this blog up, Sparrowhawk put another appearance in chasing a blackbird across the garden, about 30feet up, and then a hour or two later, I was just having a break from printing, looking out at the mass of birds in the garden, and everything just disappeared at great speed into the air raid shelters and the Sparrowhawk came stooping into the garden and put down into the Apple tree, which at least gave he a good view of him through the binos. He left again after a couple of minutes, still looking for his lunch.
Martin