Well after a long drive north through the night, it is a great pleasure to be back on Mull in Scotland. What a great start too - Otter after just five minutes after getting off the boat, thanks to a bit of advice. 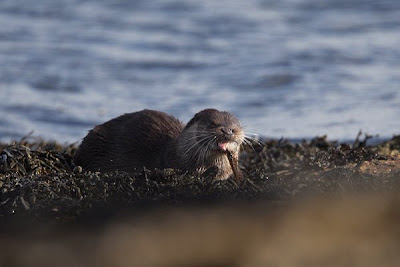 I watched a beautiful condition Dog Otter for about an hour, mostly through the binoculars. He did bring ashore a couple of fish but I was too concerned that if I got too close I would scare him off, but I did manage to get a few shots off. I will post them up a bit later as I cannot crop edit on this machine so will need to do a bit of jiggery pokery with another laptop.

Best birds of the day were the Golden Eagle and Buzzards. I had the pleasure of watching four Buzzards wheeling around in the sky display flying, and mock dog fighting. Followed about ten minutes later by a Golden Eagle who was also display flying, although I didn't see it's would be mate.

So a quick update as a taster, I am looking forward to a good couple of days ahead of me, although the weather forecast is a little iffy, but the weather does change very quickly here and sometimes the best forecast is not on the TV, but just outside the window.

Next update will be Saturday.