I have always been a fan of panned-Motion type images and have tried it on many occasions, If things are slow then its a good time to practice your panning technique,You will need your camera set on a level tripod and then either use TV mode and set your shutter speed low or do as i do and keep in AV and adjust your aperture until the shutter speed drops to the value you want-or set it in Manual, I like the AV way as if anything suddenly happens you can quickly change the small aperture to a large one and get a quick shutter speed
The image here is of a swan taking off, I had been doing a project on the local Mute swans and had pretty much everything in the bag except a shot that really showed the power of the large birds so i decided to spend a day where i new a few swans were and set up and hope to get a panned image in the bag to finish the project off,Knowing what shutter speed to set is very hit and miss,The lower the speed the more dynamic the image but the chances of getting the shot with a sharp head is greatly reduced, The swan being a big bird and a larger target and slower meant that a shutter speed of 1/25 should give me the image i wanted ,If it had been a smaller faster bird like a coot then 1/100 or more would get the shot and not just a blurry mess 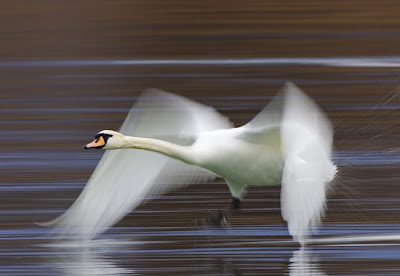 Another time i was sitting at a watering hole in South Africa, I had lots of shots of zebra,Rhino and wildebeest drinking and got some decent reflections but i wanted something different, 2 wildebeest came slowly down towards the water, i dropped the aperture down and slowly panned with them as the walked, It was taken with slide film so i had no idea what it would look like but i was pleasantly suprised with a very arty type shot,better than 2 bored looking wildebeest that would have been destined for the bin 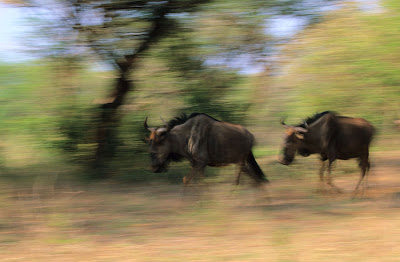 Now panned-motion images are not for everyone-some people like them and some dont, If you are the type that like something different in your images then give it a go,Keep the ISO at base value and close the aperture to give a slow speed and keep it smooth as the shutter will be open when you are following your target so smooth is the word to keep i mind-Have a go and dont be too dissapointed if they dont come out as you want straight away-practice,practice and then practice some more