Well as I mentioned on this trip report from last week, I was very grateful to Terry at Stratford Photo Group for the loan of his Canon 50D for a few days. Well I didn't use it a great deal, as I tended to go with my 1Dmk3 for the situations where I knew I needed to be sure of my handling of it.

However, it is a fine bit of kit and a body that I 'think' I would have as a back up body to the mark3 in my bag. Well why only 'think'? Well I didn't get a lot of shots out of it and essentially just in one set of light conditions, so I really would need to do a much longer trial before I would be prepared to give up my own personal thumbs up, as you will read below.

General handling was very easy, the only problem I found was down to user error. I use the back button focus method on the !d and have been for many years now. I had set it up the same on the 50D but was unable to find the option where you can switch over the Af-On button with the * button. Well it is there I found out afterwards, but it did cause me confusion when I was trying to grab focus on a Golden Eagle that was stopping down a hill towards me being mobbed by a Raven - so I missed that whole sequence of shots.

However, it did grab focus very well when the user got it right and gives sharp enough images - so no complaints there. 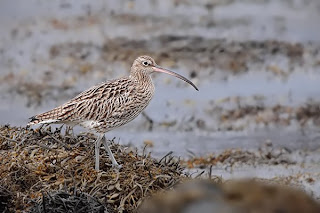 Curlew picture is a repost now I have processed it properly on the bigger screen. Light was awful and shot at ISO800 (see below)

File sizes are pretty big, jumping typically from about 12mb in RAW from the 1Dmk3 to over 20mb on the 50D, so card and hard drive management will be a little more demanding.

At ISO 800, which is a setting I am very happy to use on the 1D, the 50D files are quite a bit noisier with chroma noise. Now I have 100% pixel peeped and of course I appreciate that the 50D has 50% more pixels, but the noise was quite a bit more. I had set the in camera noise processing to be totally switched off so I could ensure a direct like for like comparison. But at these settings, I would need to use Noise software with the 50D whereas I wouldn't with the 1Dmk3. All the images I took were at ISO800 so I have nothing more scientific that that to compare. S0 it is this area that just leaves me with a little doubt.

The rear screen is fantastic and really wish I had that level of resolution on the Mark3.

There are plenty of reviews in much more detail all over the web and in various parts of the dead tree press.

I linked to this 50D tutorial a few posts back, so it is probably relevant to post again for you to get a much more objective technical appraisal than I have given here