Experimenting and having fun

With the advent of digital cameras it made life a lot easier to get good exposures and see what worked and what didn't straight away without all the cost associated with film and slides, It also cost nothing to experiment as if it didn't work then you just deleted it and started again, In the last year i have started to shoot more and more at night doing landscapes or cityscapes, Its something i would have never done with slide film and since going digital i have enjoyed the experimenting that it has allowed me to do, When i was in the Smoky Mountains a few weeks ago i stopped along the Blue Ridge Parkway at a well photographed piece of road, I took some images but the light wasn't great so i returned later in the day and climbed up the hill and up onto a rock and set up ready for the sunset, I did all the normal stuff and got some ok shots, The road wasn't that busy and it allowed me to take some images between cars, The sun was by now well and truly set and i normally wait 30 minutes or so as the best colours can come out after the sun has gone down, The shutter speeds got lower and lower-into the seconds when i pressed the shutter button and then a car came into view, I cursed but when looking at the screen on camera i had some light trails-short at the time, I decided to wait it out and see if i could get a continuous light trail from the cars, I counted as a car would enter the scene and counted between 20 and 30 seconds depending on how fast the car was travelling until it left the scene, I ended up taking around 50 images and it was the very last one that i took that came out how i had envisaged, It was a very enjoyable and fun session, I got the sunset over the smoky's but i also got a fairly unique images of it as well, I have often seen people pack up as soon as the sun disappears but stay until its too dark to shoot and use what's around you to make a common scene into something unique 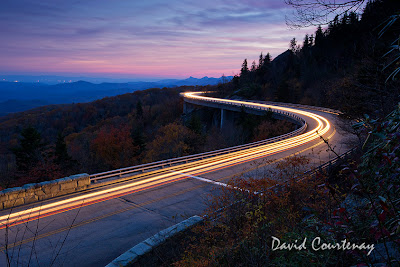 Image taken with a Nikon D3s with a 16-35F4VR and a 3 stop ND Grad Lee filter on a Gitzo tripod, Exposure time 20 seconds