How I built my moth trap

As promised, here is a quick overview of how I built my moth trap that I have talked about in previous blogs.

After reading this useful guide, I opted to make a Skinner type trap as it is without doubt the easiest to self build, or at least for my skill set, although you may indeed doubt that after you have seen my efforts.  After googling Skinner Moth trap plans, I opted for this plan and set about doing my best/worst.  I ordered my electrics from Paul Batty here, and can highly recommend him for being exceptionally helpful.  I opted for Actinic lights rather than the much brighter Mercury Vapour, as my house is surrounded by neighbours that would overlook where I would be siting the trap, and I didn't want to get complaints from such bright lighting.  The Actinic while being less bright, have a very good UV output, which is of interest to the moth.  There is a considered view that actinics will attract about 40% of that of the MV lamp.  It was a compromise that I had to make.

So with a plan, and box full of electrics, I dropped by B & Q and bought some 5.5mm ply, some 25 x 15 mm battens, and some screws.  I already had the perspex in the garage, so if you plan to make one you will need to acquire some perspex too. 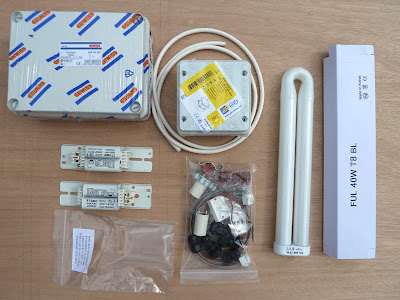 All electrics, except for power lead and plug 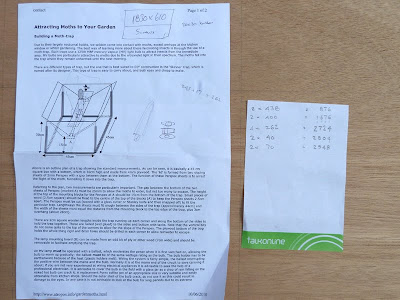 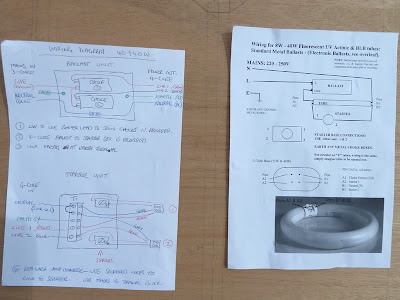 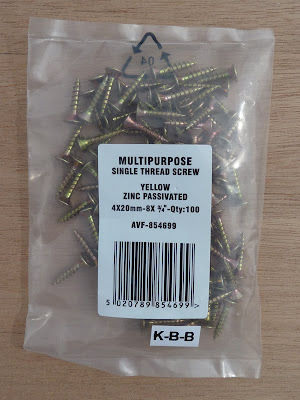 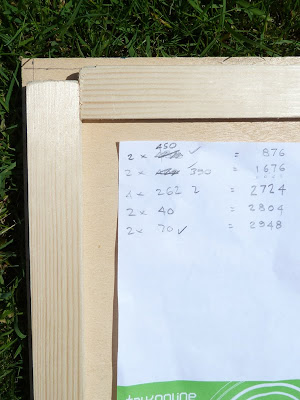 What happens when you make an error on your cutting list, with revised lengths on list
So I set about building the main box, easy enough provided you 'measure twice, cut once' as the old mantra goes.  I didn't as you can see above.
Then began the wiring, which again was easy enough.  Paul's instructions and diagrams were dead easy to follow. 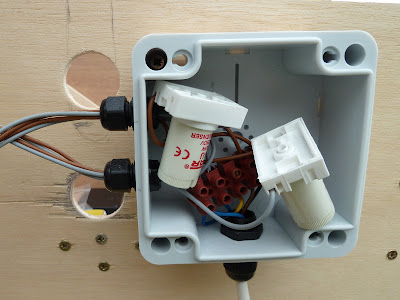 Wonky Starter box (now straightened) on side of trap box 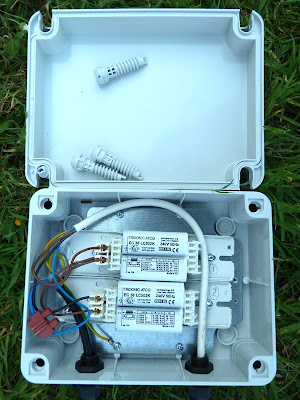 Ballast box with twin ballasts.  Black wiring in is mains power, white out goes to the starter box. 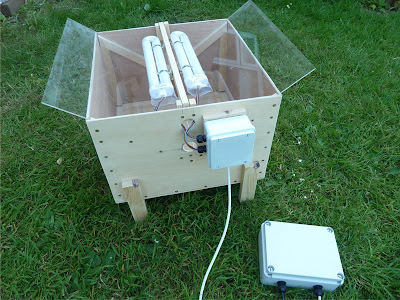 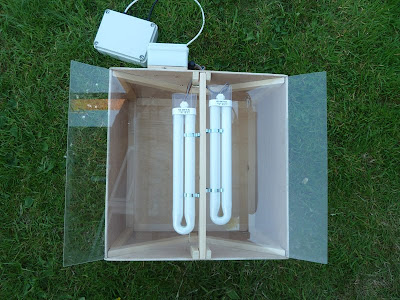 And from above
After this all that remained was to give it a coat of Ronseal brown fence paint and it was sorted.  Now unlike the commercially available traps, mine is not collapsible, as I wasn't that bothered about that.  It also keeps it in one piece to put the egg boxes in.
So for setting up, I put an RCD on the mains cable into the garage, locate the box, put a timer switch on the plug so as to switch on and off, depending on the hours of daylight.  The box base is filled with upturned egg boxes to give the moths somewhere to get under cover once they are caught.  And that is about it - all very simple.
The only difficult bit is getting up early to examine the catch the following morning.  If you leave it til the sun is well up, then you will lose a lot, as I have found out.  I tend to go down and cover it with a large dark old curtain and then go back at my leisure after a bit more sleep, although as it warms up, the moths are keen to clear off.
One trick I have also learned is to closely examine the surrounding grasses as many moths can be found there, as you will have seen from the beautiful Garden Tiger that was in my last post.
The hardest bit of the whole process is identifying them, or at least for me it is.
The book below is excellent but there are lots of species to go through.