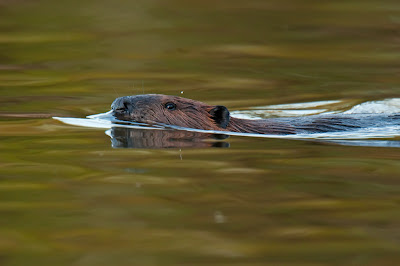 Some days are memorable for many reasons, Purple day photographic sessions don't come around very often but today was one of those days, The weather man said that Monday would be the best day of the week weather wise so i was up and out before the sun was up and down at a large lake about 10 miles from home to have another go at the ospreys, With the weather being nice i knew it would be a short session as the light would get harsh and contrasty once the sun was up high, The ospreys were flying around the nest when i arrived so i quickly set up and took some meter reading and some test shots, The next thing i know is a beaver swimming right towards me, A first for me since i have been here,He came pretty close as if to check me out then did a few large circles and headed off only to be joined by another beaver who did the same, Every now and again one would smash his tail against the water and bolt off under the water,They did this for a few minutes before heading off around to the next bay, 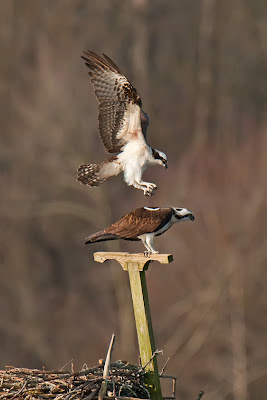 The beaver dam cant be that far away and i will go back and see if i can find it,What a great start, Things went quiet for about an hour with just one osprey on the nest and then 3 more arrived, One had a fish in the talons and briefly dropped down onto the nest a minute later it was off which i thought was strange, It went over the trees and suddenly returned being chased by a juvenille Bald Eagle who swooped around trying to relieve the osprey of its catch,After a minute or 2 it gave up and order was restored, I had this time used the 600 and 1.4x combo with the D300 as the weather was brighter than the last time and the D300 would give me some more reach, The ospreys started to mate on the post above the nest so i swapped the 1.4x for the 1.7x and waded abit further out into the lake, i was still further away from the nest than i would like and next time the chest waders are making an apperance as i ended up with 2 boots full of water, Cant complain though as the beaver and eagle shots were unexpected as were the mating shots,Back tomorrow i hope 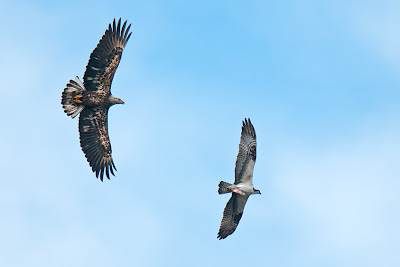