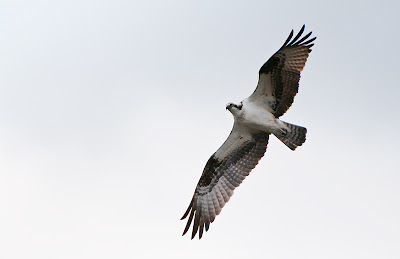 The last couple of days have seen me shooting Ospreys and tiny yellow rumped warblers, I went down to the lake yesterday to do a recce and see if i could get in a decent position to get shots of the osprey on the nest,I took the dog (mistake) and grabbed my D300 and 200-400 plus a converter, I wasn't going to shoot but if you don't take the camera something will happen, I managed to find the nest and i should be able to get a reasonable angle to it, The Osprey was on a post above the nest and watched as i approached, I was still some distance off and slowly made my way down, It was obvious that i would need to use the converter so i quickly put it on and took some shots at distance then all of a sudden the bird flew off the nest and come over to check me out,The focusing seemed horribly slow and i grabbed a couple of hand held shots and then left, When i got home i downloaded a load of rubbish, I didnt have time to set the camera up and the shots were under exposed and then realised that i had grabbed the 1.7x instead of the 1.4x-No wonder the AF was slow and i wasnt suprised that only a couple of the shots were sharpish,Not a problem for web use but really only fit for the bin-will write 100 times 'must keep standards up',It wasnt a wasted trip and i may leave it a couple of weeks until she has eggs before i shoot properly, 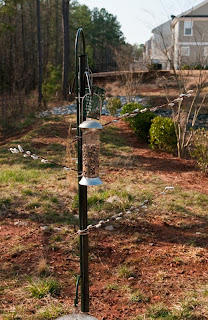 I was in my local supermarket a couple of days ago and noticed that they had some pussy willow for sale for a few dollars so i bought some and yesterday when i returned i strapped some next to my feeders and within a couple of hours the birds were landing on it and using it as a perch-Great, I wanted some shots of the Yellow Rumped Warblers now that they were getting their breeding plummage so decided that i would try today,The weatherman predicted an early fog that would burn off to a sunny day-He was correct and first thing i popped into the hide that i had set up yesterday,The fog was quite heavy but burning off giving a nice diffused light, I knew i wouldnt have long so kept my fingers crossed, I had set up the hide at minimum focusing distance and put on a 1.4x to get the bird a good size in the frame, I noticed that the ends of the willow curled towards me and and were too close to focus so i put a 12mm extension tube on and that corrected the matter, I managed about an hour before the light was too harsh, I got a couple of nice shots but noticed that the background wasnt quite how i wanted it so when i finished i moved the hide 3 feet to the right and will try again tomorrow-weather permitting 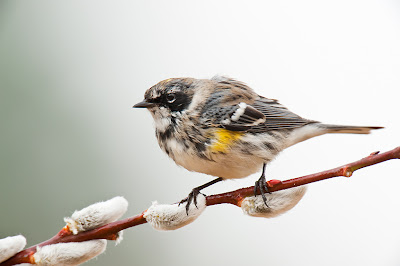