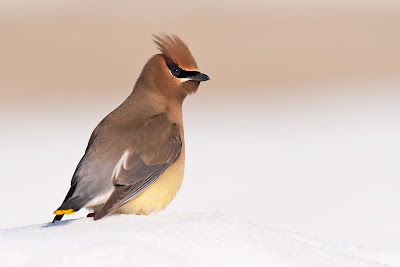 The snow that arrived a couple of days ago has stayed as the temperatures at night plummeted well below freezing and daytime wasn't much warmer-Great, So i did the same as usual i dropped my wife off at work early and raced back to get the camera gear, I spotted a good group of waxwings around the clubhouse/pool area and the light was good for me being low in the sky and behind me, I managed to get fairly close without disturbing them and waited,After a few minutes one dropped onto a low hedge covered in snow but with a small hole where it could pick some berries from and it wasnt long before about 20 dropped down to join him,The action is thick and fast and all of a sudden they fly off and land back in the trees,At one point they landed directly above me and i waited a good 10 minutes with no action so i grabbed the 200-400 and slowly got out of the car and took some shots standing up hoping that at some point they would fly,They didnt so i grabbed some shots and got back in the warm, I always make sure that the engine is turned off when shooting as you will get vibration from the engine-always ask the driver to do the same if you are on safari, Metering is easy when there is a lot of snow-just set you camera to manual and spot metering, set the aperture to what you want which in my case was F8 then looking through the viewfinder with the screen on a large snowy patch adjust the compensation until it shows +2 and you are done,Make sure that you meter off of snow that is in the same light as the birds,Also make sure that you spot meter, I made the mistake to leaving it in evaluative/matrix for the test shot and the whites completly blew-quickly changing back to spot and all was fine,Remember when you look at the histogram that most of the scene is white so it should be all the way to the right but not clipping and no flashing highlights,That way the snow will be lovely and white and not grey, I only shot for 2 hrs as it was a bright sunny day and after that the light was getting harsh,The added bonus yesterday was that the waxwings were joined by some robins and a couple of beautiful Eastern Bluebirds, The snow will be all gone tomorrow and the forecast is back to a warm 65, I hope the birds stay around for a while longer as i would like to get some in flight, I was hoping that my website would have been finished and up and running by now but there are still a couple of issues and its now looking like a few more days before they are sorted-all very frustrating but i hope it will be worth it in the end 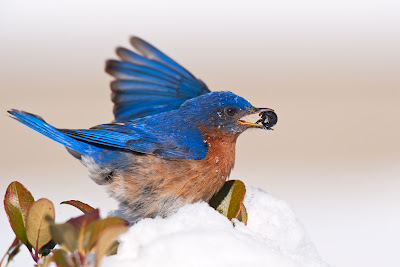