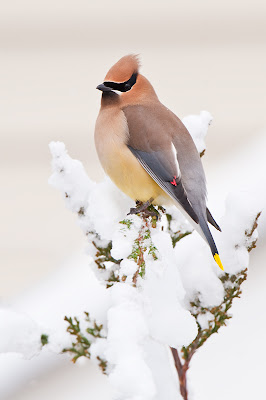 After 2 days of heavy rain it was forecast last night for snow-3-6 inches they said so i went into the garden and repositioned the hides just in case, First thing this morning i opened the blinds and there it was nice and crisp and white as a sheet, I quickly got dressed in layers and put some fresh bird seed out and got ready,Within 5 minutes i had Dark eyed Junco,Mourning Dove,Cardinals and finches fighting for the food,I spent a couple of hours shooting before i fancied a coffee, I noticed a small flock of Cedar Waxwings come and go when i was in the hide so after the coffee i decided to take a drive around the estate and see if they were around, I quickly found a flock of about 50 sitting in a small tree in somebodies garden next to the road so i slowly drove up and began shooting,They were very relaxed and i soon got some shots before they dropped onto the bushes and started to eat the berries, 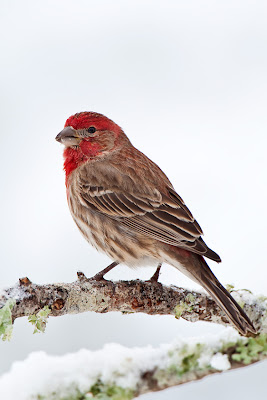 They moved a couple of times but seemed to like coming back to the same gardens,Really nice to be able to shoot these beautiful birds with snow around, It would have been nice to be able to use some flash as there black band around the eye makes it hard to see the eye if you dont shoot at the right time but there was not enough room in the car to use flash, All in all i must admit i am extremly pleased with a few of the shots and they will make nice greeting cards,When i returned to my house i looked out of the winow to check the bird feeders and there was a white tailed deer eating from the bird table so i managed a couple of shots of the deer in the snow-what a great morning
I should have mentioned that the images were exposed for Manually-spot metered off of snow in the same light as the birds then 2 stops added