While a massive storm battered the north of the UK, in particlaur giving Scotland a hammering on Thursday this week, close to my back door, my woodpecker tree was felled by the strong winds.

After Dave's recent post on the subject, it motivated to put my tree back up.

Sadly though, being an old piece of friable Silver Birch, the base wood is pretty much gone and it has badly split under the wind load.

So it is back out to the countryside soon to find a replacement.

It has seen a few past successes, and now it is time for it to become decaying log material for the small bugs and beetles to benefit from.

Here is an image of it back in February this year in action. 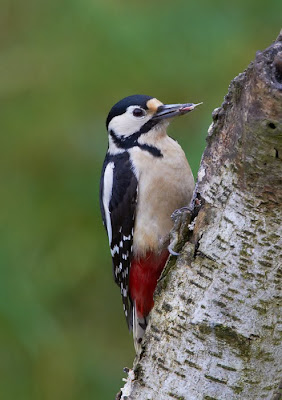 There has been a second tree fall today as well, but this time inside the house.

We popped out to get our Christmas tree today, which has pride of place in the front window. It had been up for about an hour before it was felled to the ground as an inquisitive and playful Burmese kitten decided it would be good fun to jump into it. I was however expecting it so it will get decorated tomorrow, once he and his brother have acclimatised to it, although I expect baubles will prove to be just too tempting.

Further afield in Northants, it seems that the Short Eared Owls are generating vast packs of photographers, so that rules me out going there, and down at Slimbridge, a similar story is unfolding for the Bittern there. Pack hunting isn't for me, and I have a pretty good library of images of both bird now.
Posted by WPATW at 19:16