A big hello from sunny Florida, It took 11.5 hours to get here but its worth every second, The weather is perfect, Clear blue skies and around 70 degrees going up near 80 tomorrow, We went out on the crystal river very early today and instantly was surrounded by manatees, Lots of mothers with young and lots and lots of interaction between the manatees and us, The water was pretty cloudy and green and i knew it would be busy, The light was non existent when we arrived and even when the sun came up it was low shutter speeds all the way, I had set my ISO to 800 which is normally ok but i have set it to auto ISO as i would rather have a sharp grainy image than a blurry soft image, After the manatees and lunch we went to the beach and as we arrived we saw a good size flock of skimmers but before i had chance to get the gear out some kids chased them off and in the 2 hrs we were there they did not return just leaving us with gulls and grackles so i took a handful of images and left, We went back to the river as the sun was setting and found an Osprey on a power pole near the road and managed to get some nice shots, We are off straight after the manatees in the morning for a drive down to Saraosta so i can down load the images and have time to process a few then, Until then just the one manatee shot-more to come 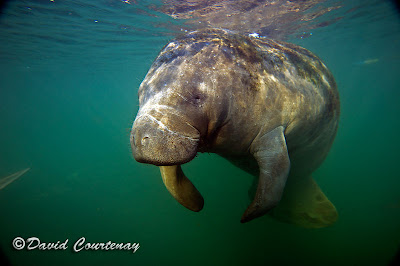 Sorry about the quick processing, I am rushed for time so the vigentting etc will have to wait

Email ThisBlogThis!Share to TwitterShare to FacebookShare to Pinterest
Labels: florida.manatees.