Its funny that Martins last blog was on moths as mine has a moth undertone, A couple of nights ago i went into my hide next to my garden in the hope of more fox images, I have a 100 watt spot light near the hide that illuminates the area where i am shooting, This allows the use of AF and gives me a good view of the area, The animals walk into the light so cant see what's happening in the hide in anyway, The light attracts all kinds of moths and night bugs, This has started to attract some predators -namely the preying Mantis, Last week when i left the hide i walked to the garden gate and was startled by a mantis on top of the gate next to the light, It actually looked directly at me and then reared up-it looked fantastic and i rushed to the front of the house to get my sigma 180 macro, as i returned it flew off, I hoped that it would return and a couple of days later it did, I watched through a tiny gap in the zip on the hide as the mantis started at the bottom of the gate and over an hour very slowly made its way up to the top and towards the light, When it was at the top and in position i had to make the decision as to whether i should just watch and carry on waiting for the fox or to take the opportunity of getting some mantis images-i chose the mantis, The foxes will always be around but i haven't seen a mantis for some time, You have to take any opportunity that you get so i slipped out of the hide and hidden i put the tripod up high and took a couple of test shots to try and work out the exposure, it was pitch black and only the mantis was catching the light, I adjusted the exposure until i started to get 'blinkys' on the LCD to show over exposed areas and then backed off a little, it worked out that the exposure would be long unless i really cranked the ISO up which i didn't really want to and as the mantis stays in one position for some time i didn't need to as long as i tightened every thing down and used a remote release, I ended up shooting for about an hour and managed lots of different angled but head on came out the best,The Sigma 180 really is sharp and i must admit i am very happy with it, i manual focused and used the live view feature to help make sure that focus was on the eyes, At the end the mantis moved down the gate rail and within a minute had caught a moth Heres my favourite 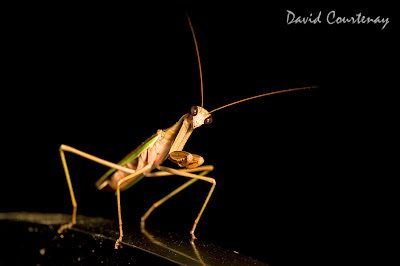