We are in Tennessee with one of Marian's nieces so Photography is on a when and can basis, We arrived Friday afternoon and after following a thousand hot rods towards Pigeon Forge we dropped our bags off and ask what was going on-seems that this weekend is THE BIG car event of the year here and the world and its wife/sister (same person) is here so it takes 30mins to get 2 miles-nice, We went down to Cades Cove, The jewel of the Smokeys, Unfortunately for some reason the meadows are uncut and the wildlife is very difficult to see, We ended the afternoon with 4 deer and 6 turkeys-i get more in my garden and to cap it off they now open at 10am on Saturday and Wednesday which is crap as the light is very harsh by then and any mist will have burnt off, I made a decision to get up early and head into the mountains to a place called Clingmans Dome which is the high point and gives great views of the sunrise and sets, I arrived early and it was still dark with stars in the sky but a distant glow meant that i wouldn't have to wait too long for the sky to lighten, I got the tripod and camera gear out then realised that i had left the ND grads in the motel so i would take some images and have to HDR them, There were already 3 photographers there and as soon as the sky started to get light a photo workshop arrived and for some reason decided that they would all stand around-ME, i got my shots and enjoyed a beautiful sunrise and left, During the day i enjoyed looking at all the shiny cars and really should have taken a camera but i will be back in a couple of weeks and decided to just have a lazy family day, Back to shoot the sunset tonight and then leave early tomorrow to go to the NC side of the mountains for a day.I quickly put 5 frames together with Photomatix but it doesn't seem to like to mist so will have to reprocess it when i get home but it gives you the idea 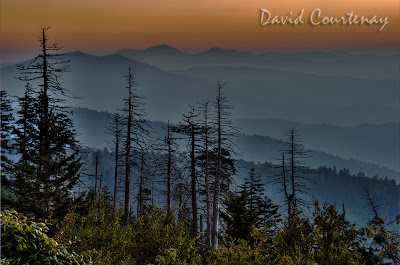 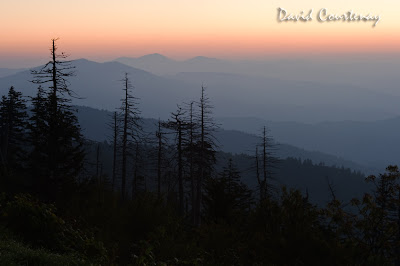