I mentioned last week that we have had 3 Raccoons visiting our garden, I nicknamed them 'the 3 amigos', I had decided that i would like some shots of them and for the last week i have been avidly pursuing them, It hasn't gone to plan and when i am in the hide they are nowhere to be seen and when i look through my back door they are there for the world to see, Very frustrating, I have seen them at 8.15,9.15 and 12.15 so no real set pattern and i have spent up to 4 hours in the hide without a peep, Not a fox,opossum or Raccoon, Its been the graveyard shift, last night i had decided that i would stay in and watch a movie, but kept getting that nagging feeling that if i didn't go out they would be dancing around the garden and it would more than annoy me, So there was nothing for it, I would just have to grin and bear it, If i wasn't there i wouldn't get them and so i would be in for the long haul, Luckily for me i struck lucky and at 8.15pm a little head popped around the tree and went to the food i had put down, I waited a couple of minutes hoping that the others would turn up but in the end i took a couple of shots, The 'coon' wasn't bothered by the flashguns but looked straight at me as it heard the quiet mode shutter on the D3s, I was using the 200-400 with a 1.4x on so their hearing is very acute, Another 'coon' arrived and started to feed and i waited again hoping the light coloured one would turn up and i could get all 3 together, It didn't happen, I am sure it wasn't far away and maybe the flashguns spooked it but i did manage a few shots of the two of them before one left shortly followed by the other, So some persistence has started to pay off and i hope it continues, They really are great looking creatures and as cute as a button-and cute sells 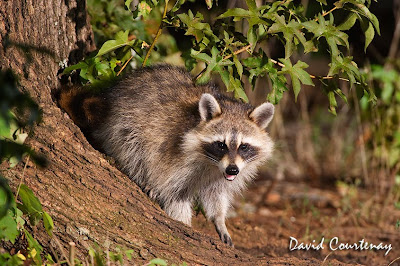 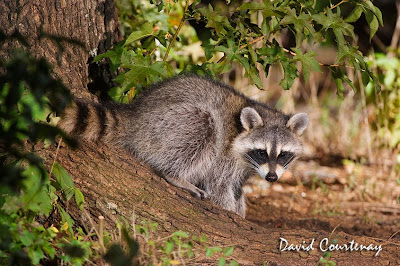 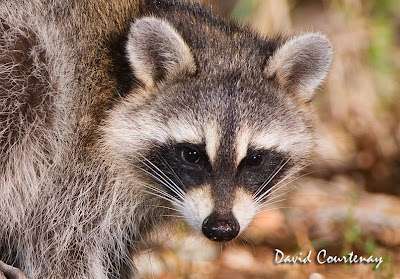 I have a couple of things to change lighting why, The background is a bit bright so i will turn that down a stop,but overall things are now looking up