I was once told that i am the most patient unpatient man that the person had ever know, Which basically means that i am normally very impatient but when it comes to wildlife photography and angling i am happy to wait and enjoy the moment knowing that if i put enough time and effort in i will get my goal or trophy, Since i moved to the States 1 year and 2 days ago i have wanted to get some good images of the Grey Fox that live in this area, I have never seen a Red fox around these parts and its nice to have something different, The problem is that 2 years down the path and still no decent images to speak of, I did get a couple last year when i was playing around with a remote set up but not up to the quality that i want, A couple of nights ago at 9.15pm i looked out of my glass back door and noticed that there were 3 raccoons eating the food that i put out every night for them and the fox and opossums, I had had my new hide in position for over a month so the next night i hoped that the 3 raccoons or the 3 amigos as i nicknamed them would return, I have been putting a small amount of dry minced type dog food out nearly every night for over a year in 3 places in my garden and every day its gone, Now lately i have had to chase a dog away from taking it so i was unsure if it was the dog or the wild animals that was the reason it was going so it was great to see the 3 amigos, I haven't seen any opossums for about 6 months and have no idea why they have disappeared although i have an idea that i will keep to myself, I see the fox regularly and sometimes 2 together which is nice, I had a great run with the opossums in the spring and although the fox would sometimes come it would never get near the food and would be very nervous around the set up, Raccoons will come and go, Sometimes you see them for a couple of days then weeks go by without a sign, So a couple of nights ago i set up with 4 flashguns, The D3s and 200-400 with the 1.4x and sat and waited, It was very hot and humid and at 11 pm when i packed up i was still sweating, At 9.30 a fox came into the garden and noticed the flashguns, had a very quick look and was gone in a blur, 20 minutes later it returned and did the same, This wasn't looking good, then 10 more minutes passed and it came back and went up to the et up for a closer look, It was extremely nervous and at one point as it moved closer a leaf touched its ear and it nearly took off, It made it to the food and took a piece and legged it, then came back, I waited and it did this a couple of times, I watched through the camera and then it eat and stayed, I waited until it took another bite and as it went down again i took a shot, It bolted but not far and came straight back-great i though but after 1 more shot it was gone and didnt return, at least i had 2 images from the shoot but one was just slightly soft on the head where it kept looking around so that just left the 1 and first image-not great but a start and something to work on, I tried again last night but it was like the grave out there and after 4 hours i gave in, North Carolina is just about to get hit by Hurricane Earl and although its off the coast more than 3 hours away i wonder if the air pressure has changed and the animals know that some bad weather may hit-who knows, It just means that i now have the taste of success and i want more-lots more 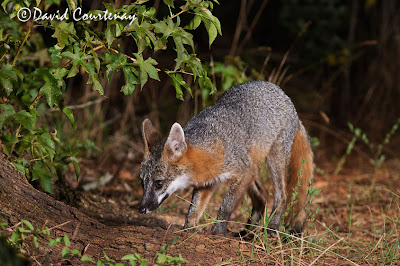