What a strange but good day 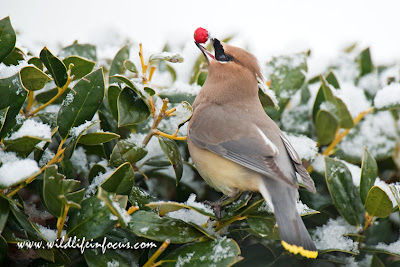 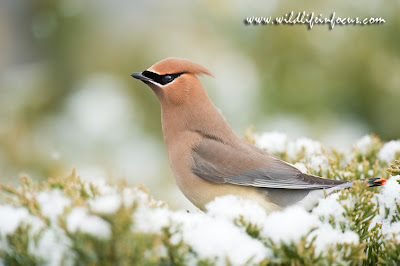 Yesterday was a strange day, We awoke to snow falling and the ground was already covered-I dont think anybody saw that coming, My wife needed to go to the office so on the way we stopped to pick up the post, As i pulled up at the communal post boxes a flock of birds dropped out of the tree and landed next to the car-waxwings, I had spent some time with them last year when it snowed, This year they were late, I dropped my wife off and rushed back for the camera and went back, They stay around the pool area as there are alot of berry bushes there, Its a matter of being close by and waiting until one bird drops down to feed instantly they all follow and then you can slowly move the car into position, I had only 2 hours to do this and so only managed a few reasonable shots, Nothing like last year which was amazing, By lunchtime the snow had gone and so it was out in the garden to decide on what to do opossum wise, I decided to use an old log that i got last year, Its Y shaped and bent, I stuck the Y through the fence and decided to have the small fir as a backdrop, I cut some plastic and wedged it in the Y to put some food in and then would make a trail of crumbs up to the log and hope the opossum would climb up it, Opossums are excellent climbers, It took a few goes before i was reasonably happy with the set up and only the images if any would tell me if it looked good, I ummed and arred about the flash set up trying to make sure everything would be illuminated, I ended up with a 4 flashgun set up, 3x SB600 and 1x SB900, I am very impressed by the SB600's they are half the price of the SB900 but for this type of work anything else would be overkill, They seem to recycle faster than the SB900 as well, if you shoot too fast the 900 doesnt always fire and needs a couple of seconds to fully charge, Obviously distance has a lot to do with it, Anyway night time comes and i am position, I take a couple of test shots and decide to move 1 flash to better light the background, Then its time to wait, The wait didnt take long, Darkness was around 6pm and by 7pm the opossum was in front of me, It followed the trail of crumb and then had a walk around looking for more, It went and thought that was that but 5 minutes later it returned and went next to the log and had a good sniff of the air, It was very windy but it must have caught the scent as it stood up next to the log and sniffed again, This time there was no hesitation and it slowly walked up the log and sat at the fork of the Y, A quick snap and look at the histogram showed all was well and the face wasnt burnt out so now just a matter of composition and the hope that it would look around every now and then, When viewing the images after i think the fence post to the left is starting to intrude so i will lengthen the Y and move the log out a foot, I am unsure about the fir tree but for now i will keep the set up there, I will use the 600 and 1.4x soon for some head shots but at the moment the 200-400 is proving itself as excellent for the job and very sharp 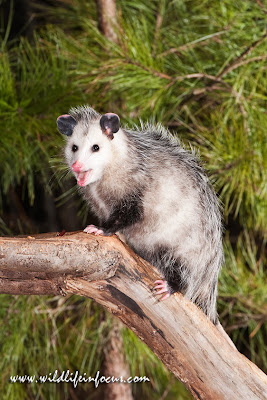 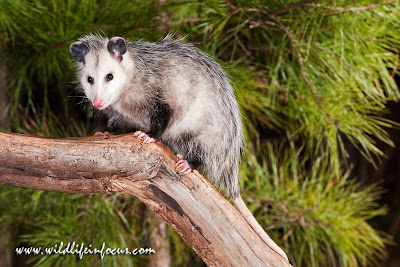 Saying a prayer before eating 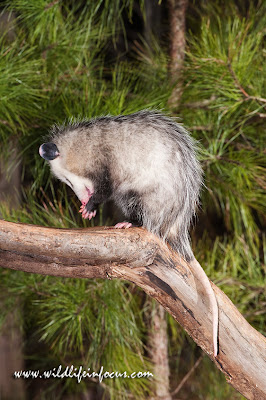 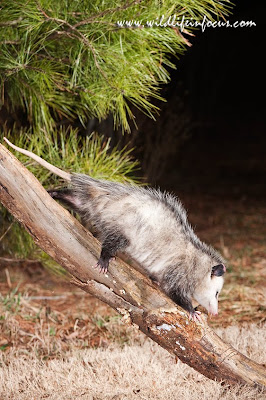