And so it begins-Project Opossum

The last couple of nights i have been trying to shoot the Virginia Opossums that come into and around my garden, I have been putting for down for months and have a mix of Opossum and Grey Fox as well as the odd Raccoon feeding there, I have been putting the food just the other side of the dividing fence between my garden and the farm next door, Consistency is the name of the game and even when i am not here i have somebody put food down, I have been putting the food over the fence to get them used to the area without dogs in it, Now i need to start enticing them into the garden and the next step is to make a type of studio in the garden using props like branches and tree stumps and anything else that is photogenic, I have 2 buddlia in the garden and an opossum or fox under that when its in flower will do nicely, I started out with my D3 with a 24-70 poked through the fence, Set to single shot and manual focus, I focused on a leaf that was on the floor and then put the food on and around the leaf, The first night i used 2 flashguns (SB600) just to see the reactions the opossums had to the flash-None, Well nearly none, After a couple of flashes the opossum moved away and then came back, This was great, I was concerned it would flee and not come back for hours, Some animals like badgers can take a while to get used to flash and projects using flash take some patience and sometimes 1 shot a night is it, I used a remote release to trigger the set up and watched from a small window that leads up to my office, At first one opossum came out and started to feed, I had a garden light directed over to that part of the garden so i could clearly see what was going on, Quickly a 2nd opossum joined the first and started to feed with it, I took a shot and then another, Trying to only shoot when their heads were raised, I was surprised when a 3rd opossum came out, I had never seen more than 2, I want the opossums to get used to the flashguns going off as when they have young which they carry on their backs i want them to come to the baited area without concern, After the opossums had gone i bought the camera gear in and checked the images, It would be hit and miss with framing etc, I noticed that some of the images had a good exposure whilst others were blown out on the opossums pale faces, I checked the flashguns and noticed 1 had a slightly different setting in the menu, I changed the settings and decided to add another flash to add more light to the background, So 2nd night and 3 flashguns, The SB900 was up high on a tripod and set at 200mm and full power, I had 1 SB600 set at 50mm and  -1 with the foot screwed to a post, The 2nd SB600 was set at 50mm and full power and set to the right of the set up and positioned low, All the gear-camera and flashguns set to manual for better control, The 2nd night came and 2 opossums appeared but individually, 1 fed and went up a tree and then another came and fed, I also had 4 white tailed deer feeding next to them on some corn i threw out-Not bad for a suburban garden, I put the corn out to attract the deer which would hopefully make the opossums at ease, I ended the 2nd night with around 25 images, Composition is the main problem so the images here are cropped to help with that, Alot of people don't really like the opossums as they can be seen as ugly, I however think they are very cute and will enjoy spending some time with them, I did have a grey fox come to the baited area, It was very shy and fed shortly before moving away and coming back, On its third approach i took a shot, It backed off and sat down,after a while it approached again only to stop as it could see itself on the lens-it left, The foxes are not going to be easy but they are something i really want to shoot and i have the time, Thats the thing with taking on a project, You need to put some time and effort in-what you dont get this year hopefully will come next year, I have plenty of shots in mind so its down to me to mak them into a reality 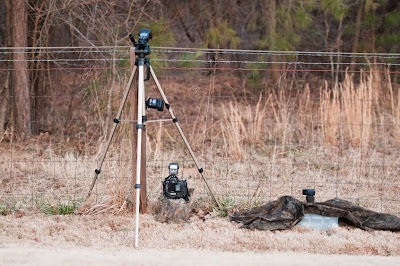 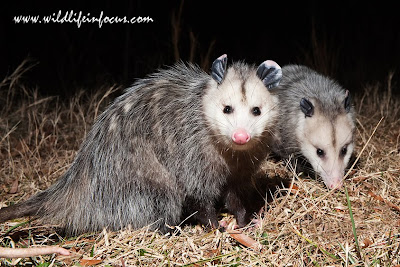 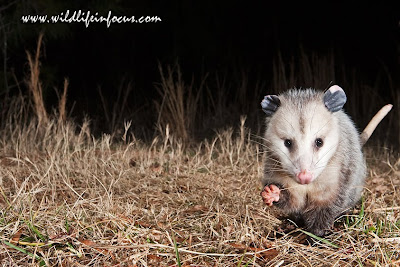 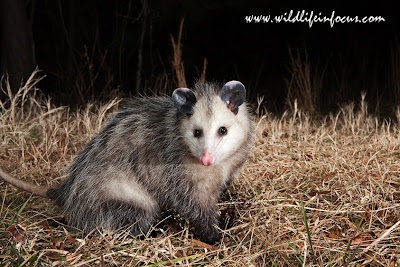