Well it was great to get out yesterday into some late winter sun.  More snow overnight here and quite heavy falls on the higher ground over the Cotswolds and Forest of Dean was quite picturesque.

We set out early with a mission to see three key target species, with the objective of getting images of one of them.  However, the ones I got were not quite what I had expected.

The first target species were Hawfinch - the place we were going has had thirty reported recently. Sadly, we drew a total blank on these.

But while searching for the Hawfinch we did see quite a few Goldcrest in the binocs, along with four different tits and a few Nuthatch.

On to the next site with some grey and cold weather.  Didn't seem promising either, but as we all know you need  lots of patience with our subjects.  Gradually the light got better and better.

Ravens croaked from the treetops, woodpeckers drummed, and then I noticed a couple of crows divebombing the tree line in the distance.  This was my clue, as I was looking for the proverbial needle in a haystack.

I swung my spotting scope to where the crows were divebombing and there was my second target species - a male Goshawk, looking non plussed at the noisy corvids.

It was happy to sit there for twenty minutes or so.  I must thank the crows for showing me where it was as I wouldn't have seen it.

Meanwhile, more little Goldcrests flitted across the pine trees in front of us.  While watching the Gos, I heard  the call for the next target species, as Jac picked up the little bird on the tree in front of us.

There it was, a beatiful male Crossbill, glowing red in the winter sun.  But too far for a decent image with the 1Dmk111, 500 f4 and 1.4 TC.  I quickly stuck the 7D body on the lens in case it reappeared to give a better reach.

Then in a flash, two little green birds landed in front of me.  My initial thought was Greenfinch, but once I found them in the viewfinder I could see that they were female Crossbills.  After a couple of frames, a male came in much closer than the first opportunity, with the light behind me. 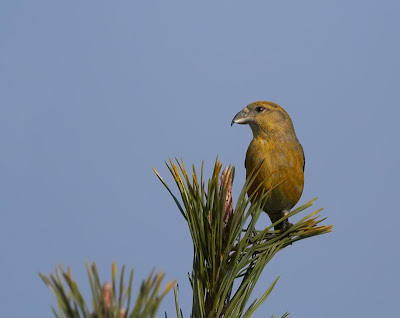 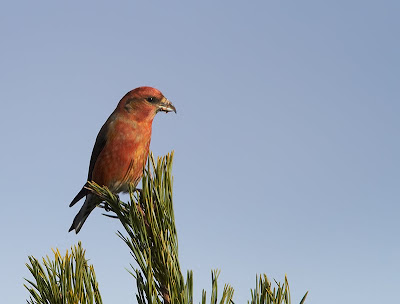 Male Crossbill
So I am really pleased to share these two with you.

Walking back to the car, overhead a Buzzard soared, with  another bird much higher above.  A quick check with the binos showed it to be another Goshawk.  Again too far for the camera.

We did take another run back for the Hawfinch but again no signs although we did see another Buzzard and Goshawk.  They might have been the ones we saw earlier, or they could have been different birds.

After lunch and the afternoon with my mum, we drove back through the snowy Cotwolds to see many Buzzards, as well as three Fallow Deer running across snowy field. Sadly much too dark for photos, as it was five minutes, later when we saw a Fox doing the same thing.

So a great day.  I will be heading back for more Goshawk in the weeks to come with a bit of luck.

Coming later this week, will be some full frame images that I got of a female Sparrowhawk who sat down in my garden on Saturday morning for half an hour.

So make sure you check in.