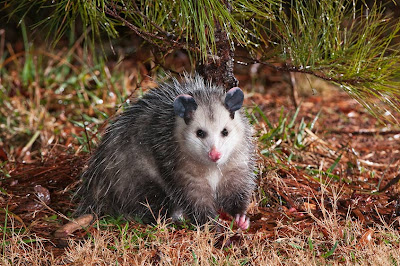 One thing to keep in mind when taking on a project is not to be phased-You have time, So when the 3rd night turned wet and i didn't make it out i didn't panic so i just sat and watched, 1 opossum and 1 fox eating nose to nose-Fantastic, You have to realise that you wont get all the shots you want in a few days/nights and that you will go through lean times, I once went 21 nights without 1 badger image, Enjoy just being there and any images are a bonus and don't panic-IT WILL HAPPEN-you just don't know when,I decided that i needed more control over the composition so the next day i set up my pop up tent next to the fence and decided to use a small fir tree as a prop, That night i set up the 3 flashguns and got into the tent along with the D300 and 200-400, I took a couple of test shots and adjusted the flashguns via the SU-800, I had 7 deer next to the fence at one point and the fox kept coming and going, Eventually an opossum arrived and followed the small trail of food to the fir, At this point i realised that i had under estimated the size of the opossum, I went to zoom back and just touching the lens coat made the opossum look at me, I slowly zoomed back and waited but the opossum was very nervous and before i had a chance to take a shot it was gone, I waited 30 mins and called it a night, Maybe this isnt going to be as easy as i had first thought, I decided to swap the pop up tent for a pop up hide/blind and move it back another 6 feet, The reason for using a pop up tent is that its low and gives a nice perspective, The problem with it is thats it has a built in groundsheet, Great for keeping warm but the slightest movement and it makes a noise, By moving the hide back i could still get a reasonable perspective-not too high, I use a bright garden light powered  from the house and its bright enough to just allow AF and composition, By using flash as my main light i can keep the ISO at its base level-200 for the best IQ, So now to see if it works, Well take a look at the images,The night again was wet but i had time to prep, I covered the flashguns with zip lock freezer bags and strapped a plastic bag around the end of the lens to keep everything dry, The deer came first followed by the fox and then the opossum came and stayed for 20 mins-very relaxed, I managed to zoom in and out and even change from landscape to portrait-very carefully and slowly-without disturbing the animal, The fox arrived at the fence and the opossum run off but 10 mins later a different one arrived for a few minutes before leaving, I have noticed that the opossums have different markings on their ears so easy to I.D, So far so good, I am now in the process of finding new props for future shoots 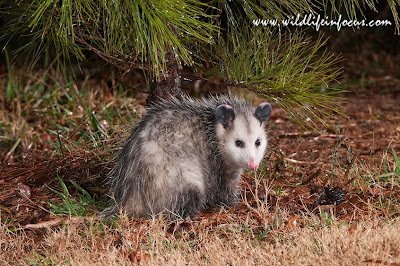 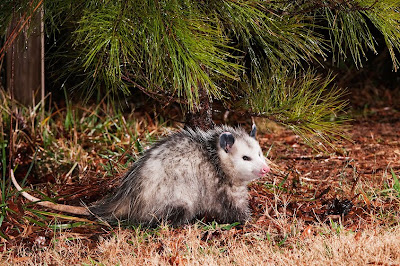 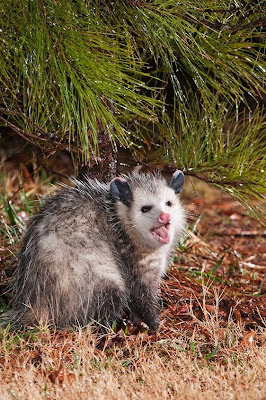