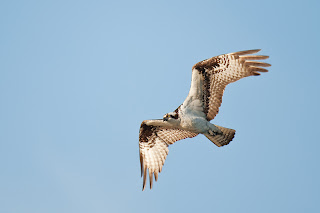 Well as i have been away for the last couple of weeks i thought i would report on my local patch, Last night we had 5 deer next to our garden where i put some corn out-2 does and 3 young which are always nice to see,The bird feeders haven't been filled since i went away so they are a bit quiet although the woodpecker has been on the fat feeder along with crows which will eat me out of house and home,The cardinals are still around as well as some American goldfinch in full colour, I was up before light this morning and went to a lake nearby where the ospreys are,They were still there and didn't come off of the nest for an hour but then had a fly around to stretch their wings and then when they re landed one of them picked an old dead fish on the side of the nest and started tearing small pieces off and i guess feeding the chicks that i couldn't see so all seems well there, 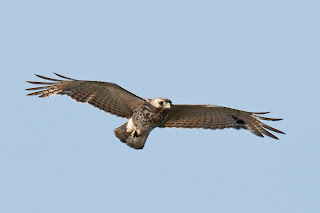 There were a few other ospreys flying around as well as a bald eagle in the distance, One bird that turned up that i didn't expect to see was a loon in the centre of the lake-the first that i have seen and i think will only be in migration although i hope it stays, Lots of herons on the lake as well and they looked great flying through the early morning mist that was rising off of the lake, I only stayed about 3 hrs as the sun came up the light was harsh,Just as i was about to pack up a sharp shinned hawk flew over the osprey nest and over me aloowing my first shots of this small hawk,The lake level has dropped allowing me to get closer to the osprey nest and not have to use the D300 as much as i don't need the extra reach, I must admit that i preferred the D300 over the D3 for alot of my shooting when i first went over to Nikon but lately the heart has swung the other way and i absolutely love the D3 now-such a capable camera in any situation 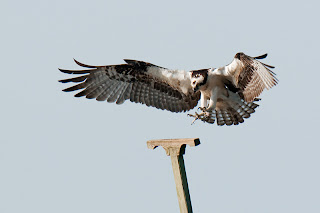