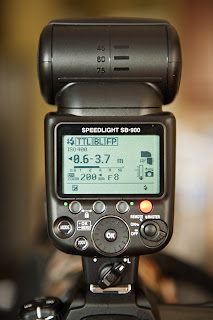 Nikon's new flash the SB900 replaced the ever popular SB800 and came in for some criticism when first launched mainly for being much bigger in size than the previous model and secondly it has a temperature gauge built in which will switch the flash off if it hits a certain heat-which caused wedding togs some grief when shooting a lot of images together and then the flash stopped. It is possible to turn this feature off but still a concern. The size thing,well what can you do. It doesn't seem to bad to me but when its in its case along with the filters etc. that come with it it does take up some room in your bag.

Nikon has always held a reputation for having the best flashguns on the market and after some use with the SB900 I can only agree that it is far superior to the Canon guns I have used in the past. As with all technology these days things are getting far more complicated to use-just looks at the menus on the Canon 1D3 and Nikon D3. The manual that comes with the D3 is nearly 450 pages!!, but the SB900 has proved easy to use and the results are superb. Its the first flashgun that I have owned that has actually had a firmware update which is no bad things as small glitches can be ironed out rather than worked around and for the cost of these high tech guns they need to be good, The gun is no lightweight but feels a quality piece of kit,The metal shoe fits nicely into the hot shoe and with a simple turn of a lever locks solidly into place.

Whilst I have used it for some fill flash on birds I have been shooting some local events as well like baseball, Easter egg hunt and a baby shower (I kid you not) not the usual type of stuff that people associate me with but the more you use your kit the better results you will get so i have used these as training events, I feel that flash is under used and often feel that people are a little scared of using it, With digital its all become easier as you can see and adjust the images as you take them.

Like all modern day flash guns the SB900 is TTL which means its reads from the camera rather than you having to put the setting in but it also has a couple of very nice features up its sleeve-firstly FP mode,Now flashguns are set to fire up to a certain speed or sync normally between 1/60 and 1/250 depending on the camera/flash so if you are shooting in bright sunlight the chances are that your shutter speed will exceed this causing over exposure by the flash, On my old EX550 flash I could set FP when needed to allow the flash sync speed to exceed the 1/250 and go to any speed,The SB900 has auto FP and will cut in and out when needed so you do not have to worry about what shutter speed you use and nicest of all it has a BL mode which i keep set which stands for balanced flash and does what it say-it balances the flash in the scene and gives a lovely even lighting-flash for me has never been so easy, One thing i have noticed is that if you shoot close to something dialling in -1/3 helps to stop getting too bright an image-easily corrected in PP but just as easy to get right in camera.

Here is an image taken at an Easter egg hunt. As you can see the sun is directly over head but the D3 with 14-24 and SB900 set as above has given lovely fill flash. So that I didn't put the kids off I just dropped the camera to the floor in front of the kids and let the wide angle lens do the rest-easy 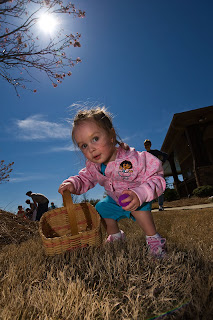