Just every once in a while, we find examples of the persistence and dedication of nature having successful outcomes.
I have been lucky enough to see the fortunes of a pair of Great Crested Grebes at my place of work.

Back at the beginning of the year, we needed to undertake a project to shore up the banking around the lake as it was subsiding. As a nature lover, I was aware, as was the Project Engineer of the breeding pair of Grebes that nest in the affected area.

To that end, he bought a floating island, pre-planted with reeds for it to nest. It was placed about 15 metres away from the previous nest site that was actually within touching distance of a public footpath. This was put in position well before the breeding season and the reeds in the effected area were removed.

However, this didn't deter the Grebes and they promptly built there nest on the open water right next to the footpath.

She sat on eggs for many weeks but it was clearly a failure.

They tried again with the same result!!

By this time, the reeds on the floating island had grown and it was now occupied by a Coot that has fledged a couple of chicks. But they tried for a third time, and happily a couple of weeks ago two little chicks hatched, looking just like little black and white mint humbugs sweets.

So I headed off to the Lake in my lunchtime today and got some images to share with you. 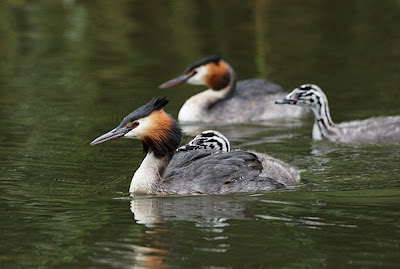 Mum, Dad and the two chicks 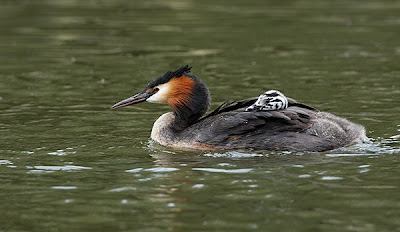 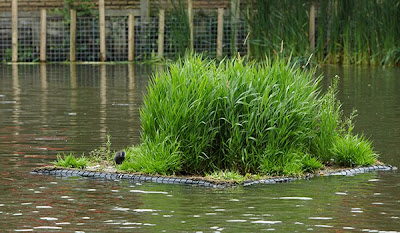 Man made floating island with a tiny Coot chick
So with perseverance and dedication, nature has made it. It has been great to see that they were finally successful, despite them ignoring the helping hand that we tried to give them.

As a result of them nesting where they did, our project works were much delayed and are only just commencing at the furthest point away from them.