Local Patch - a quick update from the garden

One of the delights of the wildlife garden that I have developed over the last twelve months means that when I am very busy with other things in my life such as work, decorating and other chores, a bit of relief back to nature is but half a dozen steps away.

While giving my aching arms and hands a rest (sanding down and painting walls, doors and skirting boards!!!) a quick wander round the garden resulting in seeing numerous butterflies; Large and Small Whites, Green Veined Whites, Peacocks, Brimstones, Painted Ladies, Red Admiral and Gatekeepers. The last three named species recently turning up in more prolific numbers. After the very wet week that we have had, it is good to see the sun bringing out the butterflies again.

Down in the pond most of the little froglets have now dispersed out into the undergrowth, and there are now numerous baby Smooth Newts instead. There are still quite a few adult frogs still there too. Damsels are now fewer in number, but Blue tailed were seen today.

I think there is a hedgehog too - I keep putting out some special food which is disappearing.

Overhead, I saw a male Emperor Dragonfly today looking beautiful in the sunshine.

There are still plenty of Swifts overhead here, despite seeing lots going home, as I reported earlier in the week.

Nothing out of the ordinary in the garden on the bird front at the moment. This is a repeat of last year. Best sightings have been watching the adult Blackbirds feeding their juveniles, which I guess must be their second, or possibly even their third clutch of the year.

I have a trip out with a group of other photographers to the Warwickshire Butterfly Conservation site that I reported on here earlier in the year. It will be interesting to see how things have changed since May

Hope I can bring some images back to share with you later in the week.

In the meantime, here are a couple of images of Painted Lady from about an hour ago in the garden here. That Canon 180 macro is just such a peachy lens. 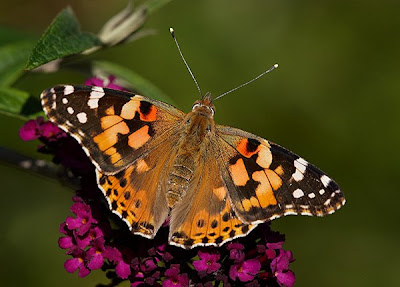 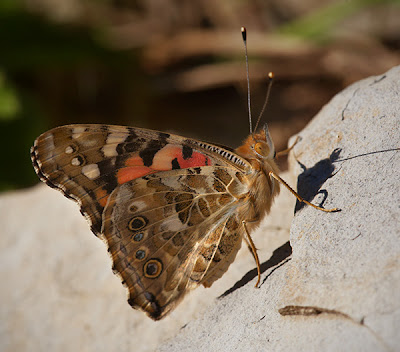