Tips and Techniques-To Flash or not to Flash

When i was in Colorado i had an opportunity to shoot the lovely Stellas Jay, Its a bird i have seen in California but one that i have never managed to get a good image of, In Colorado we found a very willing subject,Obviously used to people and landed in front of us seconds after getting out of the car, Stellas Jays can be very difficult to shoot as have a very dark head and a black eye,Unless you can get the light right the eye disappears into the dark head and the image is useless, So i decided that flash would be the way to bring the eye 'out' the other difficult part was that the blue feathers reflected the light but the dark head absorbed the light, If i used enough flash to bring the eye out the feathers on the body looked 'overflashed' I decided to shoot with the flash but have the camera in continuous high mode so if i took a couple of quick shots the first would have flash and the second shot wouldn't,That way i could choose which to use, Here both are usable but many i shot only the flashed image worked, The flash was used with a better beamer as i was shooting with the 600F4,The images are unprocessed except for a small amount of sharpening-The first image has the flash and the second doesn't 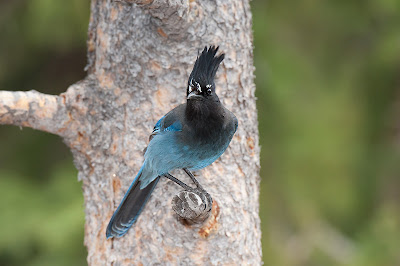 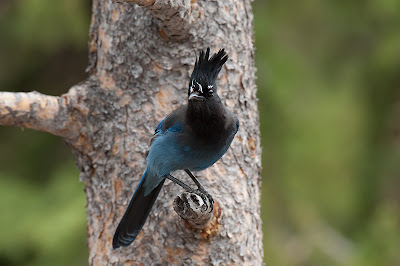