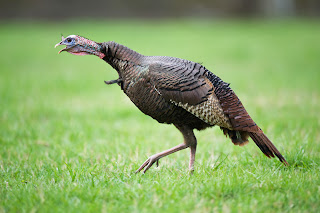 Yesterday morning was lovely, I arrived early and went into the park,The Turkeys were at the entrance as normal, 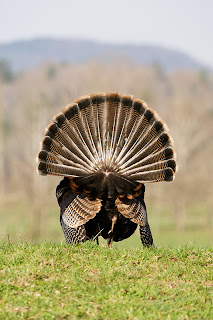 As they were distant i decided to come back to them later and wanted to get into a position to get some early morning landscape shots in,The mist was in a distant valley so i decided to shoot with a long lens at distance rather than make my way into the valley, A long lens will give the image compression, 'pulling' distant things together, I used the Nikon 200-400 with the D3, Shooting with a bean bag from the car, The sun was coming up to my left and just hitting the lower trees-it looked stunning with the mountains in the distance, I shot both landscape and portrait mode for the agent to choose and i shot wide (200mm) and zoomed in (400mm), 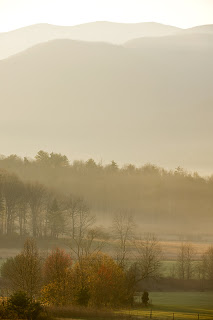 Its amazing how some places can give you inspiration to shoot and this place does it for me, After i bagged some landscapes i went on to some deer and then back for the turkeys, A big male had made his way to the road side and whilst displaying with his back to me i managed to get into position so that when he turned around i was ready to shoot, He didn't seem to give a damn and carried on as if i wasn't there, When i left the park i decided to take some shots of the many streams with small waterfalls and bracketed my exposures so when loaded onto the PC i could HDR the image which i must admit to being very impressed with-more of that to come 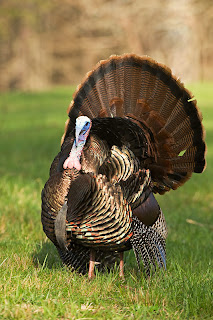 Today could not have been more different, Within 30 mins of entering the park the day turned into night as the sky darkened (ISO 1600 i managed 1/8 sec) then loud claps of thunder, bolts of lightening striking the mountains around me and torrential rain, I stayed another 2 hrs but it never improved so i called it a day-Last day tomorrow so fingers crossed 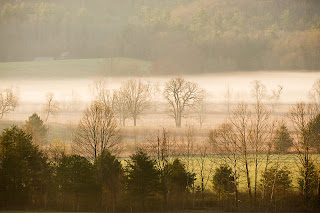