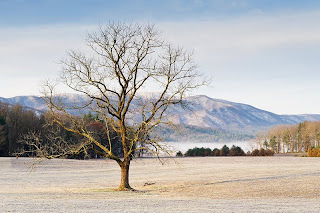 I didn't make it into the Smokies yesterday-The weather was very bad with heavy Snow showers and i had a couple od things to sort out, I had looked at the forecast for today and it looked pretty good so i was itching to get out this morning and arrived well before the gates opened,There was still snow on the mountains and a report of 12'' at the top-all in one day,The morning was bright and frosty with a thin layer of snow at the base of the mountains, As per their name the floor had a nice thick layer of mist that quickly burnt off,but not before i shot some landscapes and a couple of deer, 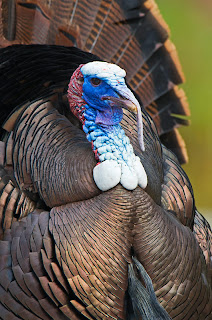 The Turkeys were still near the entrance but still distant so i hoped that i would bump into some more further round the park, Little did i know that it would be near te end of the loop that some Turkeys popped out of the woodland but were followed (too) closely by a local photographer who literally herded them along-no point in staying there so i drove off but as i did another single turkey appeared and strutted his stuff right in front of me, I took some full body type shots before grabbing the big gun (600) which had a 1.4x and D300 attached, I had seen an image a long time ago that really impressed me of these strange looking bird, I looked through the view finder and it was full of turkey, the shutter speed was very low 1/40 but i didnt want to up the ISO so a steady hand was called for and i managed plenty of shots to make sure that i had nailed it-brilliant only 2 days in and my target was in the bag, I drove off very pleased with myself and quickly viewed a large woodpecker through the trees-a pilated-it was massive (size of a crow) and only a few feet from the floor, I tried from the car but there was too many branches in the way, I slowly got out of the car and quietly crept through the woodland only for a truck to pull up to see what i was doing and the bird flew, I carried on driving to the camp site to see if any bears had been seen, i grabbed a coffee and waited, A few American robins landed nearby so i grabbed my camera and a young lad came from nowhere and chased them off-looking very pleased with himself-dont you just love em, Once the kid had gone i carried on waiting to see if they returned, they didnt but instead another pilated woodpecker landed in the tree right in front of me, I only had the camera and beanbag so had to handhold the monster lens,after a had some shots in the bag i decided to quickly go to the car and grab the tripod,The bird hung around and as i grabbed another couple of shots it dropped out of the tree and fed around a stump close by-well all my christmas's came at once and it stayed for about 10 mins and in the shade so i didnt have to worry about blowing the bright whites, The Pilated is a bird that was high on my wanted list when i came to the states and to have one so obliging was amazing-what a morning and what a place, I cant wait for the 'fall' as this place is soo picturesque during the winter it will be amazing with the golden folage 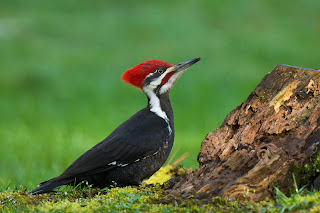