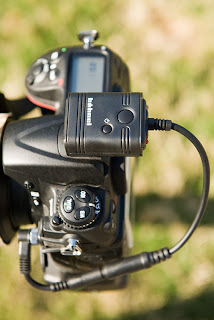 Heres a review that didn't start well and i thought it was going to be a slating, The postman delivered a couple of packages yesterday, 1 being a Think Tank case for my upcoming trip to Colorado,The other was a small package containing a Hahmel Pro Remote Control, I have read a couple of reviews in monthlies that intimated that this was a good product,Hahmel have been around a while and make quality products at good prices, I wanted a wireless remote since going over to Nikon, I used to use a Canon LC-4 which at around £300 is bloody expensive but i had it a few years and the wide angle wildlife shots that i got with it paid for itself time over, I don't use one a lot but they really do have their uses, So at around £35 or $60 it was a no brainer, The one for the Nikon comes with a hand remote and a transmitter that can go onto the hot shoe, The cord between the camera and transmitter has a break in it and you get 3 cords that fit into it for different bodies from the latest D3/X to the D1 series and every body in between-great, 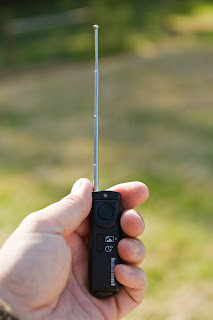 It also comes with all the batteries which is a bonus as nothing worse than getting a new toy and not being able to play with it straight away, So i put the right connector on for my D3 and D300 bodies and connected it to the camera,Firstly the pin connection is snug at best and takes some effort to get out, I set everything up and raised the antenna and pushed the button-its a hair trigger and if you have it set to high speed mode then you get 9 frames before you can think about it,so setting the camera to single shot i tried again,I noticed that the image didn't pop up on the screen and wouldn't until i disconnected the transmitter-strange i thought and then i could hear the stabiliser spinning without touching the button and it wouldn't switch off which would drain the battery, I removed it from the D3 and put it on a D300 with 14-24 (no stabiliser) but then i could here the focus hunting all the time without touching the button-i thought i had a dud and would need to call the service dept, I came upstairs to my pc and bought the unit with me, I had one last look and noticed that the connection in the cable wasnt fully snapped in-1 big push and SNAP in it went, i went to have another go and bingo everything worked, I set it back up in the garden and took a series of shots and the stabiliser worked ok turning off shortly after the shot and the images popped up on screen, I left the camera in the garden and went indoors with 2 walls between myself and the camera, pressed the button and bingo it took a shot so i paced 50m and took a shot and it worked fine -sunlight wont affect the performance as its radio controlled, The units are well made and nice and small, 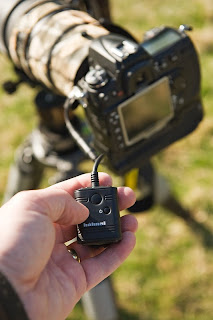 You can take the transmitter part off of the camera and use it as a normal corded remote as there is a button for that which is very handy,The hand piece has button for focus/shoot and a self timer button, It can used as BULB setting as well and both units have a 4 digit channel panel so you set yours so that others in the area wont affect it-well thought out and for the money amazing value, after the initial problems it all seems to work fine and you just need to remember to snap the cords together, I look forward to working with this piece of kit along with my D3 and 14-24 to get real close ups of the animals that use my garden, I will keep you informed of how things work out