Gear We Use and Abuse - Portable disc storage 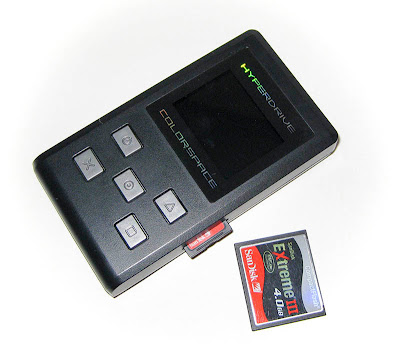 One of the challenges we face on longer trips is that of image storage. With cameras having greater resolution and consequently larger file sizes, we need to think carefully about how we will protect our precious images until we get them back to the 'safety' ?? of our hard drives.
The options I have used over the last few years have been varied and potentially cumbersome, particularly when going overseas. I solved all my ills this time last year before I went to visit Dave in Switzerland, I knew I would not be able to take the laptop and I knew or hoped I would be coming back with many images.
I had used an old 20GB portable Flashtrax, which was unbelievably slow and battery life was awful, but it got me through a few trips and with the laptop meant that I could save my images to two locations.

It is no good saying " I'll just take plenty of cards" - they get lost, stolen or corrupted - extremely rare I grant, but you have NO back up.
One portable device also is not back up - again the same rules apply, and of course there is the old IT adage that a hard disc has two states - failed or about to fail!!

When flying, my gear is my ONE item of hand luggage, so once I have sorted all my lenses out there is no room for a laptop any more, so a newer and neater option was needed.
A good friend had given me the nod about the HyperDrive Space device, which had subsequently been updated with the Colourspace. At the time, the main route to getting these was to import from the US, but a little fishing found that Digital Depot had just started importing. So a few phone calls later, a bit of wheeling and dealing and two were on their way.

Two? - Yes as I wanted true back up. The images show the units and the screen interface. I have been using both devices for twelve months now, they have not missed a beat for me and done everything I have needed. Battery life is excellent and I have never actually needed to use the little external 4 x AA battery caddy that I also bought.

As you can see from the size compared to a CF card, they are pretty small. For full specs visit the Hyper Drive site. They have slots for all card types in current usage and for me that is both CF and SD with the 1Dmk3. Load and download speeds are incredibly quick and have never caused me any issues.
Since I bought this model, there are now another couple of variants out that may or may not be what you need. I know I do not need to change for a while. The units I have use a standard laptop 2.5" drive and can easily be interchanged if I wish. I chose the 160GB models that were a reasonable deal at the time, and have served all my needs on trips of up to ten days so far with ample space to spare, bearing in mind I have to cater for two photographers needs in that allowance for my partner Sue. 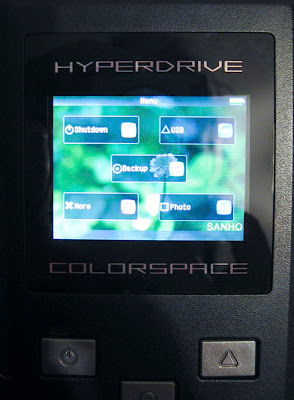 There are a number of other manufacturers who make similar devices including Canon, Epson and Jobo. I chose the HyperDrive for value for money, capacity, speed, size convenience and above all they were recommended from a couple of sources I consider to be trustworthy - always a good recommendation.

One final reminder is not to keep them together in the same bag while travelling - lose one, lose both - keep them well separated, and if you have a long suffering partner with you, give them one to carry for you. 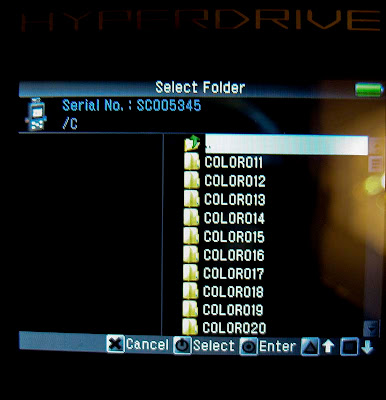 Email ThisBlogThis!Share to TwitterShare to FacebookShare to Pinterest
Labels: Colourspace, Digital Depot, gear we use and abuse, HyperDrive