From the archives - Skomer's Puffins

Once a week we will do a trip back down memory lane to share some images from the archives. In the depths of winter with dark days, grey light and fewer photo opportunities, at least here in the UK at the moment, I thought I would share some images from a couple of trips I made to Skomer in West Wales during the summer of 2005. 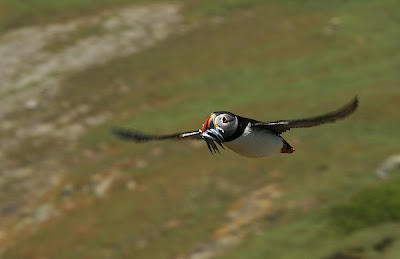 Puffins are fascinating birds, that fly at great speed while they bring ashore their load of sand eels for their chicks in the burrows. They outrun a phalanx of gulls and other predators in the air, which is the easy bit. The difficulty comes once they have landed, whereupon the gulls will mug them of their hard earned catch.
The Puffins spend the majority of their year at sea, only coming onto land to nest and fledge their chicks. So if you want to see them, your opportunities are limited between April and about the end of July. The images with sand eels were taken towards the end of June, once the chicks have hatched. If you go before hatching you will see plenty of in flight birds, but without catches as they are only eating for themselves at this stage and will do at sea where it is safer for them.
Puffins can be seen at a few locations around the UK and Skomer is a good location that entails a boat trip cross to the island.

All the details you need to now about getting the can be found on the website of The Wildlife Trust of South and West Wales.

It is certainly a great day out, providing you are fortunate with the weather. There is virtually no shelter on the island so make sure you are prepared for all weather eventualities, including plenty of water and sunscreen for days like we had when I took these images. It is a reasonable walk around the island, easily covered, although make 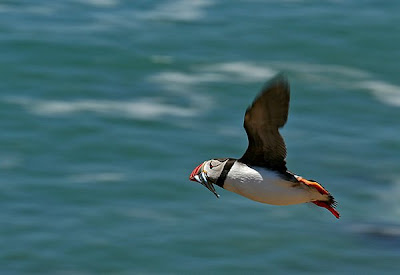 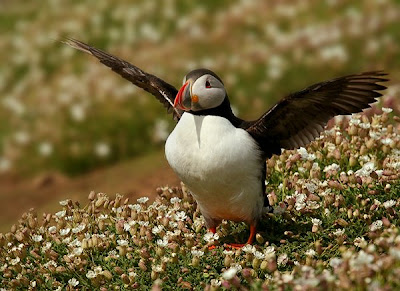 sure you have appropriate footwear. The flower on the island are just magic, particulalry early in the season when the ground is carpeted with Bluebell's, followed later by White and Red Campion. There are a number of other exciting species to see including Fulmar, Razorbill and Kittiwake. I saw a few Choughs there too. All paths should be strictly adhered to as the whole island is riddled with burrows of Manx Shearwaters, a secretive bird that comes out at night time, so it is likely the only ones you will see will be dead from predation.
To see the seasonal calendar, check out the calendar here.
Photography of these birds can be very easy to very difficult, depending on what you set out to achieve. At the western side of the island at a place called The Wyck, the photo opportunities are probably the best. Stay on the marked paths, and when they walk across by your feet, please make way for thenmand remember their welfare is more important that your image. All these images were taken with my old Canon 20D and my 70-200f4L either with or without the 1.4 EF extender, so you do not need large lenses. In fact wide angles can be useful for low levels on the paths.
So get your calendar out and plan your trips now.

Email ThisBlogThis!Share to TwitterShare to FacebookShare to Pinterest
Labels: 20D, From the archives, Puffins, Skomer, The Wildlife Trust of South and West Wales