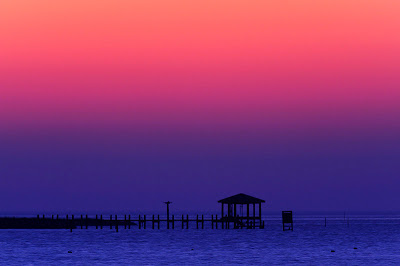 What makes us get up at an unearthly hour-Way before sunrise and then to stay until after the sunsets-Light,Not just any light but sweet ,soft,warm light,It gives our images a beautiful glow and adds more than any filter ever could,There is nothing like watching the sun rise and i actually prefer it to the light at sunset but will gladly take either,The difficult bit is not finding the subject its finding the subject in the right light,This takes time and effort,Late last year i visited a large lake in North Carolina and witnessed 2 beautiful sunsets on both nights i was there,The first was a golden glow that covered the lake-see images posted before, 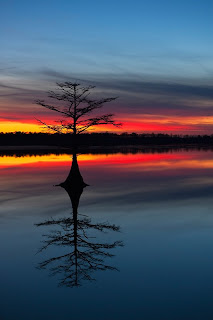 The second struggled until the sun had actually set and then there were bars of red,orange and yellow,This is where luck played its hand and a Great Blue Heron landed in the middle of the lake in front of me,I grabbed my D3 and 600 combo and added a 1.7x,I pushed the ISO up to 800 and checked the shutter speed-1/25 umm,I moved position until the heron coincided with a red area of the lake and looked through the view finder-WOW,I exposed for the water which made for a silhouette of the bird,I had to use a beanbag at this low shutter speed as i find this to be the most stable form of support,Right place,Right time,It doesnt happen everyday and you can only try and make the most of it,Quick thinking is the order of the day as the light only last a couple of minutes and then its gone,A couple of days later i was up with the lark and made my way up the coast to a lake near the sea that migratory birds were using,The light appeared over the sea and its was stunning,I was sitting in my car hoping that the Snow Geese close by would fly-they didnt but i watched one getting closer as it walked through the scrub which was getting hit by the lovely warm light-well beggars cant be choosers so i took some shots-nice,the scrub went really red for about a minute before the colour temp of the light changed and it was gone-shortly afterwoods a couple of thousand snow geese appeared over the horizon-if only, 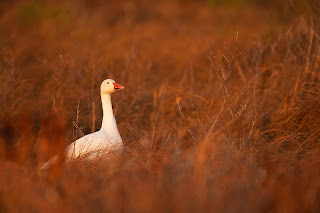 The great thing about the Outer Banks that run down the North Carolina coast is that you are basically standing on a narrow spit of land with sea both sides-East one way and West the other so great for both Sunrises and Sunsets,All you can hope for is a clear sky,Of course nothing is perfect as if you have a clear sky at sunrise then after the initial light it quickly gets harsh and contrasty-causing heavy shadows, So i then call it a day and spend the rest of the time looking for new places to shoot,whereas if the sky is overcast then you dont get the lovely warm light but you get shadowless light in which you can shoot all day-just not birds in flight unless you like a white sky
Today i am off to the Outer Banks again for 4 days hoping for some great light and plenty of birds and if things go well a bear as well-I will let you know how it is going in a couple of days 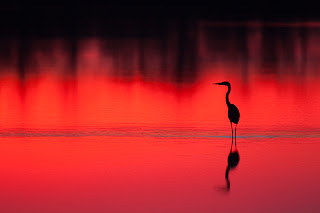