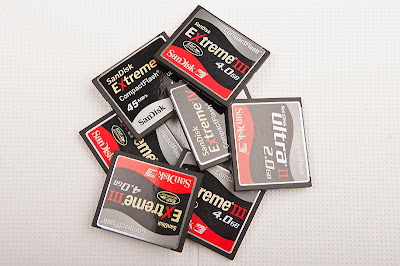 Digital Film comes in various forms, the most common or popular being CF or compact flash cards and the SD or secure digital cards. These have replaced the old microdrives which were the cheap CF card of its day but as they had moving parts they were unreliable (and slow) and with the drop in price of CF/SD cards its days were numbered. It wasn't that long ago when you could say that you would pay about £100+ per 1GB but these days cards are much cheaper and there is no reason to not have sufficient for at least a full days shooting. I now carry around 30GB of CF cards on me (My Nikon bodies only take CF) so this means that even on the 'best' days I wont run short.
I remember going abroad to shoot and having to carry in excess of 100 rolls of slide film with me- but now a handful of cards and a downloader and you are set. One thing that you must be careful of is when inserting your card into the camera, if it is not 100% straight it can and will bend the pins inside the camera body meaning a trip to the repairers.When downloading you can simply plug the camera body into your PC and do a direct download, but I prefer to take the card out and download from a CF card reader (readers are available for all types of card) Using a firewire downloader you can download your images straight into the PC very fast, USB2 downloaders are excellent if you have a camera under 10MP but once you are over 10MP and the file sizes are very large a firewire downloader is the fastest way, There are various manufacturers of cards Sandisk and Lexar are probably the biggest names followed by Kingston and various others, I would advise to go with a good make and not penny pinch on some cheap card that nobody has heard of. I have used Sandisk from the start and with their lifetime guarantee and free recovery software I cant see that changing soon. Most bodies will take 1 card but some pro bodies take 2 - either 2 CF or 1 CF and 1 SD card, 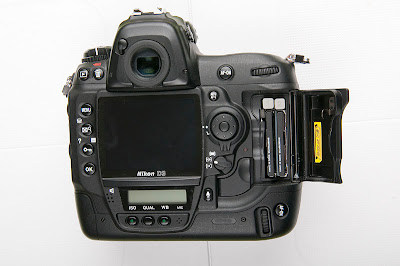 This can be a bonus as you can either use the 2nd card as a back up, shooting RAW files to 1 card and Jpegs to the other or have the second card for over spill so if you have 2x4GB cards in, you can shoot 8 GB of images without having to swap cards over-Great! With cards now up to 32 GB that means you could have 64GB of cards in one camera body-Now I wouldn't advise anybody to do this as that a lot of images and if a card get corrupted in any way you could lose an awful lot of shots. I keep my cards down to a max. of 4GB in a 12 MP body. If I was using a body over 20MP I may go to 8GB cards.

CF/SD cards can be confusing- so which one to buy and what are the numbers on them? As I have said I buy Sandisk, but there are many in the range from the Ultra range to the Extreme range. At this moment in time, the Sandisk Extreme 111 is by far the best value card around in my opinion, I would recommend this card to anybody no matter what camera they use. 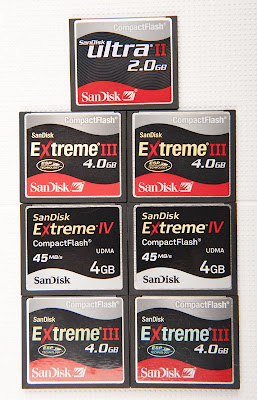 The original Extreme 111 was rated at 20MB/S but the new ones are rated at 30MB/S whilst the Extreme IV's are rated at 45MB/s. What does that mean? - well its the speed that the images could be uploaded and downloaded to and from your camera. Some card manufacturers rate their cards but X speed, Lexar for example rate theres at 133x or 300x. If you have a 10 year old digital body you wont need the fastest cards and will be wasting your money if you buy them as there will limitations on the uploading speed of an old or budget camera, however if you have a fast PC/Mac and a fast card reader you will still be able to upload to the PC/MAC quickly. Rob Galbraith has spent some time doing charts that show the downloading speeds of the current range of cards and his site is well worth a vist if you need more info on what cards to use.
See Perfomance Chart here