OK here is a the first of hopefully a weekly update from each side of the pond on our local wildlife.
It has been a very busy time in our garden here in Stratford upon Avon, particularly when we had the freezing condition in the early part of January. The regular birds in the garden are the Blackbirds (up to 25), always there first as the light starts to come up. Next in are the House Sparrows, which number up to about 50 throughout the day. Other regulars are Collared Dove, Wood Pigeon, Magpie, Crow, a rowdy mob of 20 or more Starlings. Chaffinch and Greenfinch numbers are well up this year, with dips in Goldfinch and particularly Tits. Regular couples of Blue, Great and Coal come in to the seed feeders, totally ignoring all the nut options. There is a flock of about 30 Long Tail Tits that make an appearance every few days, coming to within a couple of feet of the back windows. 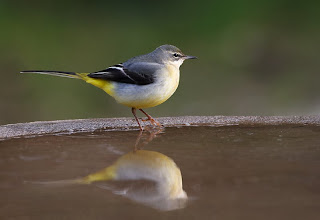 Rarer stuff include our new regular Grey Wagtail who drops onto the reflection pool that I built late last year. A single Goldcrest came in last weekend along with three Redwings and single Fieldfare sat on top of the apple tree.

In my local countryside I have had great sightings of large flocks of Fieldfare and Lapwing, along with a few Redwings. Buzzard activity is pretty frequent with at least two of the pairs being regularly seen. Owl activity comprises of a couple of separate Barn Owls hunting near the road side as I have been driving home, plus a Little Owl seen on the top of a telegraph pole. Pheasant sightings are now substantially less as we get towards the end of the shooting season. There was one location last year where I was seeing three Brown Hare. Well they are back, with further sightings in the same field most days. Photographically, they are a nightmare as they are so far away, so I will be having to look to get access permissions if I am going to get any photos. It was good to see a Buzzard this morning tucking into a very good meal that will keep it fed up for quite a while.

So that's it for this week. I will be back on this topic with the next update from here in two weeks. Dave's go next week.

Finally, apologies for those of you who have come looking for Long Lenses Part 2 - events rather overtook me yesterday, so look out for it tomorrow night