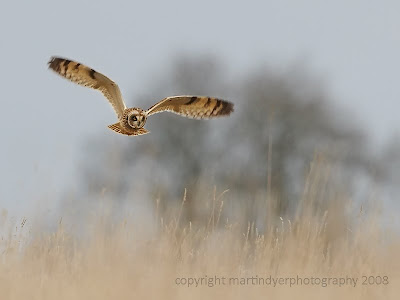 Well after my post of 14th December, when we were getting used to this blogger system, I have been back to the Short Eared Owl site on a number of occasions. Mostly in terrible light, but with occasional glimpses of sunlight.
I have seen either three or four birds on each occasion, hunting across a couple of fields. The location is pretty good photographically with one field shooting up hill, usually with the light behind, with some long dried grass in the foreground like this. Shot with Canon 1Dmk3, 500 f4 L + 1.4EFTC, ISO 1000 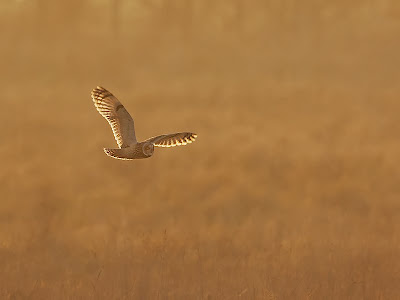 n, although this has been quite rare on my trips. The site is about 45 minutes south of Stratford upon Avon, in the Cotswolds and I tend to find I leave here in stunning photo light only for it to clag in on me when I am about three miles from the site. Sods Law - but you have to be there to get the image. Armchair wildlife photography doesn't work!!

But on the occasions when the light does show, you can get images like this if you are prepared to shoot into the light. This time at ISO 800.

A friend, Graham Goddard wanted to visist the site so we went down on New Years Day, having avoided hangovers with Graham setting out from home at about 6am that day!!. After a fairly fruitless morning at WWT Slimbridge, we went up onto the Cotswolds to see the most amazing haw frost covering the landscape. Unfortunatey, the sky was still very grey but the scenary was fabulous. We observed some great sights - large flock 150+ of Golden Plover, four SEO's on show, a hare on the drive up, three Buzzards, a kestrel talon locking and falling with one of the Owls, a couple of Snipe flying through and a Peregrine falcon through twice, and Graham also tells me a Barn Owl about five minutes after I left when I gave up shooting as it was virtually dark by then. 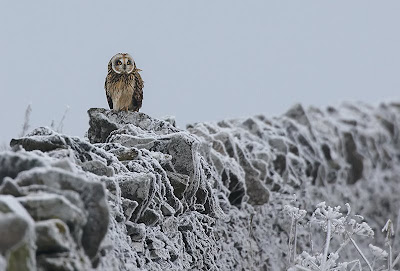 But I was pleased to get this image at extreme range, at ISO1600 and the 2 x converter, at f10 with camera on bean bag on dry stone wall.

A small splash of colour on a monochrome scene

All images were shot in M mode, metering from neutral scenes and I use the 'expose to the right' methodology. Both of these will be subjects that we will cover in later blog posts - so keep watching.