A frustrating but productive week

Its been a strange week, Frustrating even, The weather has been all over the place, 85 degrees one day and 57 the next, We have had a fair amount of rain, More than half the week has been wet, I have stayed busy though and overall have made some progress for future projects, Lets start with some news

Cameras
Nikon updated their budget Dslr which now sports a 24mp sensor, Now that's a lot of pixels and if you made it into a full frame sensor with the same size pixels it would certainly put the D800 in the shade, I am sure that its the same Sony sensor that they have in their A77 etc and whilst the detail looks good in the Sony it looked noisy, I wonder what magic Nikon have put on it, The samples on the Nikon website look good at low ISO, Either way that must now open the door for future D5200 and D7200 models and lets not forget the most awaited upgrade of the D300, It looks like its going to be a very busy year for Nikon, I just hope that they can keep up with demand, Most complaints on the forums are from people that cant get hold of the D800 or D4, The D800 seems to be showing any weaknesses in the lenses even the mighty 14-24 so i would think that new lenses may be coming in the future, There is a good review from a Canon photographer of the new 5D3 and D800, It shows both have good and bad points but what it really does show is just how good the Dynamic range is on the D800 sensor, Have a read here and have a good look at page 2,
DXO mark's 5D3 sensor review was published and the comparison between the 5D3 and D800 can be seen here, Obviously it only shows the sensor scores rather than the overall camera but the comments about Canon not making much progress in sensor development or words to that effect seem to hold true compared to Sony, DR actually being slightly lower than the 5D2 and IQ being similar to the 4 year old camera,
So my week started with a trip into the woods to try for the red bellied woodpecker at the nest, I decided to try and get the bird in flight and after a couple of hours gave up, It wasn't a complete waste as i learned a lot about the birds behavior and will be back this week to give it another go, The best i got was this image, Thinking back i should have backed off and cropped the D800 image in 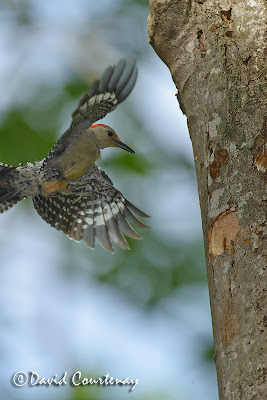 I also tried to shoot the chickadees at the bird box which ended in a few hours playing with flashguns which was not a waste of time and i also set up at the bluebird box remotely and this would have been successful if i had focused better!! It was mainly a testing week in many ways, I set up one night for the fox and gave up when one of the flashguns didn't flash-again my fault and the only image that i got was very under exposed, I pulled the exposure back in photoshop and although 1.5 stops under it easily came back without noise or grain and proved yet again just how good that sensor is-very impressive 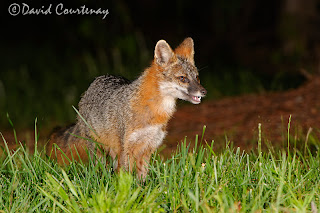 My neighbor called me to say that the wrens that we found to be nesting in a large plant pot outside her back door had chicks, I popped around and shot from the car, The chicks must have just hatched and give it a week and they will be poking their heads out when being fed, I took a few shots from the car using the D800 and 600mm and had an off camera flash to the left, The parent birds were coming and  going on a regular basis and bought back a variety of bugs, One being a wolf spider that you can clearly see in the heavily cropped image here 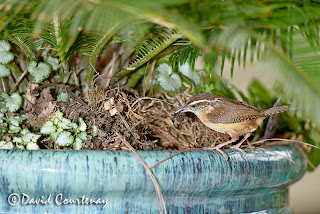 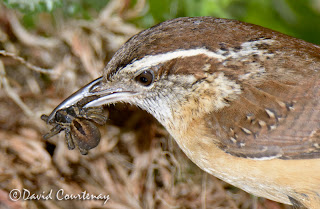 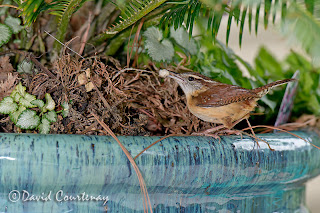 The nest was under a small palm type plant so i had to lift the palm with some string to shoot and then lowered them afterwards to keep the nest safe, You need to be careful when shooting at the nest to make sure that predators are not notified of its presence,
Yesterday i decided to make an infinity pool to go at the end of my garden, I got the idea and inspiration from our blogging buddy Graham Goddard who wrote about making one on his blog, It only took a couple of hours and it was in place, i still have a few things to sort but as you can see in the image its pretty much ready to go, I managed to squeeze a hide into the trees and will give it a work out as soon as the birds start to use it, 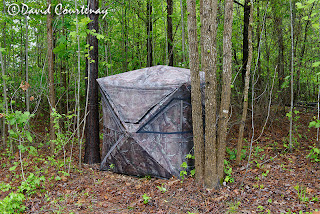 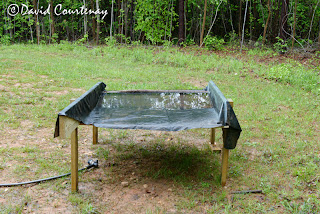 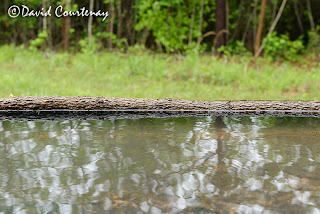 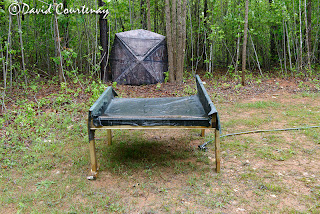 So that was my week, Not overly productive photographically but lots done for the future