So what is it and why?

Well it isn't Nikon.....yet, although that is more likely now than at any time previously - more of which later

Well, some aspects of my photography have changed and I have needed to think differently.  You will have seen that I recently have returned to two wheels after a lay off, coincidentally since 1995.   With that comes the need for a new compromise.  Big heavy SLR bodies plus lenses and all the gear do not mix with the challenges of motorcycle touring.  With limited space and load carrying capability on the bike, a new set of challenges posed for me to consider..

What do I hope to achieve and what should I consider.  Well I suppose this dilemma has been tougher to think about than the do I/don't I get the next DSLR body on my chosen system when they came along.

With every new Canon body that came along for me, it was very simple - do I want/need it.  Yes/No?

As usual with Canon it was wait quite a while til they sort the bugs and the price gets closer to something more sensible.  Sadly, the same cannot be said for their thinking on new lenses, but enough of that.

So I started looking at Point & Shoot options from a couple of hundred pounds upwards.  I liked the Canon S100, G12, Fuji X10, and a couple of Panasonic Lumixs - but the problem was always going to be (and still is) that tiny little sensors, light gathering, noise, plus ridiculously short lenses meant that getting half decent out of focus backgrounds was really never going to happen.

I then started to look at the emerging mirrorless, interchangeable lens system cameras which have much larger sensors. I toyed with the Nikon 1 system, and liked the look, I came back to the Fuji X10 for a bit, as the build quality looks cracking, and as it had good write ups but again, small sensor excluded it..  I looked briefly at the Sony Mirrorless concept but the lenses are stupidly big and didn't think that was going to help my space/size/weight issues too much.

I briefly got excited about the Canon G1X - but the reports were quite indifferent, it was a lot a of money and fixed lens, although the out of focus sample images looked good.  But as with all Canon stuff these days, they just seem to make non cutting edge minor changes and the competition leave them standing.

So I then started looking at the Panasonic G series - mirroless, interchangeable lenses on the micro four thirds system, with the ability to use Pana and Olympus lenses, plus with adaptors other lenses.  So imagine for a minute.  Canon 300f4 lens -   a cracking lens, on the four thirds system, which has a two times crop factor.  You have a good quality 600 f4 for less than a grand!!

So I took delivery on Friday of the Panasonic GX1, with the 14-42 Powerzoom lens.  Not the fastest zoom in the world but with IS and also a tiny profile when stowed, it fits into a tiny space to go in my bikes tank bag.  With the 100-300 lens due soon as well, I will have an up to 600f5.6 again with a tiny size, and tiny weight.

Picking up Dave's point about carrying large and heavy gear around on his last blog, the concept is appealing.

Now before you think I am getting carried away with this super new marvo product, I am fully aware that it will never be the same as a Canon or Nikon 600f4.  But I am not so sure that I actually want that any more.

So I have taken a couple of quick test shots with it today.  Nothing special, but it does show the ability to get relatively out of focus backgrounds. 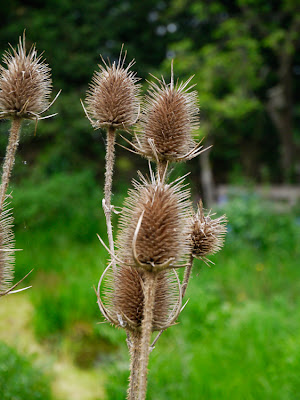 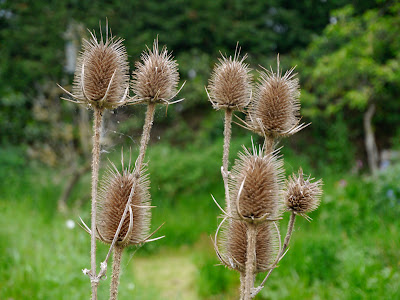 In each case I used the touch screen AF area selection and picked the upper middle teasel on the top image and top left on the second images. These are OK with the rest being just off.  Lens at 42mm (84mm equiv at 35mm), and at ISO 400.  Slowish shutter speeds and the IS doing a bit of work.

Early days, but encouraging signs and not too unhappy with backgrounds at these focal lengths.

I will do some more testing over the coming days and share my experiences.

There is a decent test report here that goes into it in depth if you are interested.

Dave is getting great results from his Nikon D800 and given that I now have little invested in Canon, I will almost certainly look to make the final switch over for my wides and macro stuff later in the year, when finances and camera stock availability and its prices are more attractive.

So on to the 'Preparations' part of the headline of the blog with another couple of GX1 test shots to share. 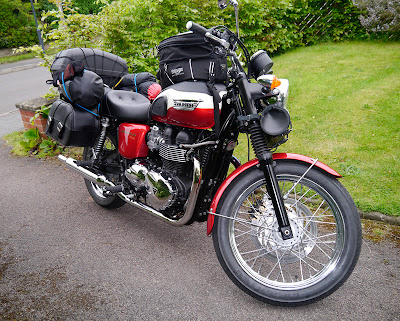 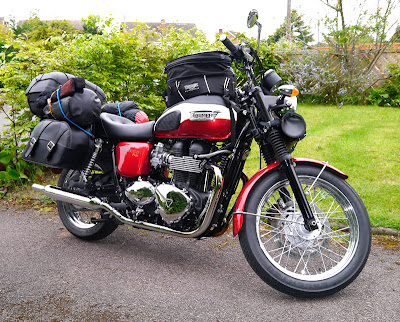 With motorcycle touring about to start in some order for Jacqui and me, I did a test load and run out today.  Our plans are to go self supported camping, so with all camping gear, stuff for the bike and all the clothing needed, we loaded her up and had a run out to make sure all is well and stable.  4 stroke big bore twin power made very light work of the massively increased load and it will be a pleasure touring in the UK and Europe this year and next.