A good week for the foxes 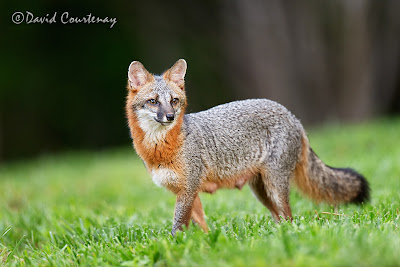 I have managed to shoot the foxes every night except 2 for the last 7 nights, It was only bad weather that stopped me shooting the other 2 as we had the aftermath of tropical storm Beryl, I think it was Wednesday night that we had Tornado warnings and extreme rain, I watched the very dark clouds overhead looking very threatening but i don't think any tornado's touched down until near the coast, its that time of year here in NC, I have my gear set up around 5.30 and watch from my house until the fox or foxes arrive then go out, The fox stop and watch as i sneek into position and then carry on as if i am not there, I have never had semi tame foxes to myself, Some neighbors semi habituated them long before i arrived here, Its something i have never really agreed with and have always shot totally wild foxes that would run even if they could just smell you so this is something totally different, Saying that if i move or make a noise they are ready to run but if i stay still they will just keep an eye on me and carry on, The food is obviously more important to them and the cubs than i am, The male is far more skittish than the female who has walked as close as 15 feet from me, A couple of nights i have laid out flat or as flat as my stomach will allow for a better point of view and used the beanbag for camera support, Its by far the best way of getting super sharp images and better than any tripod, The foxes come out anywhere between 6.15pm and 8pm or as i say ISO 400 and ISO 1600, I sometimes use the D3s as its the better camera in low light but i do really try to use the D800 purely for the file sizes although i dont like to shoot over ISO 800 due to grain or noise starting to show, Its a good stop below the D3s for noise but the file sizes keep me reaching for it first, Shutter speeds average 1/100 shooting wide open at F4 and using the 600 lens means that good technique and waiting for the fox to be totally still is the way to go and be prepared to bin a lot of images due to slight movement in the head, Saying that i have been taking around 100 images a night so at the end of the week still have a lot of keepers.
I had mentioned to my wife that the deer and fox look tick free but the female clearly had a huge tick under her chin and on close inspection of one of the shots of her she has a lot of smaller ticks around her eyes, We take ticks off of our dog every night so any animals that live in the woodland must be covered, 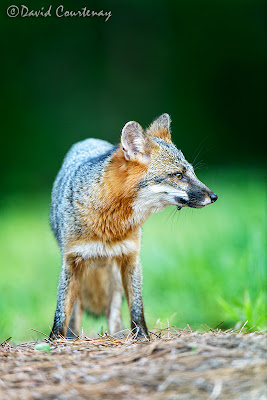 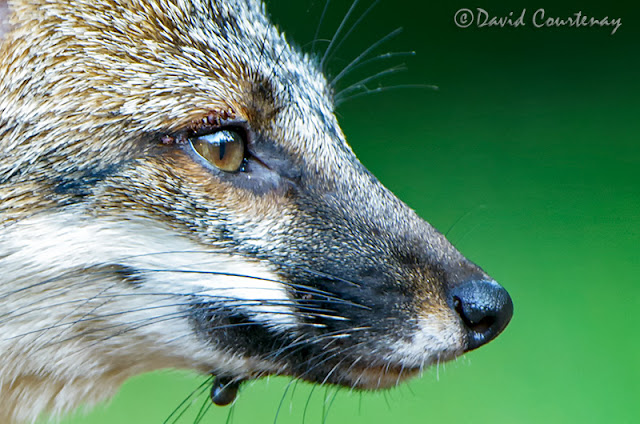 You may also notice that i have over cooked the exposure a small amount and there is a small blown out area near the mouth, Its something to keep in mind when shooting foxes and shooting to the right, Around the nose area is very easy to blow out, 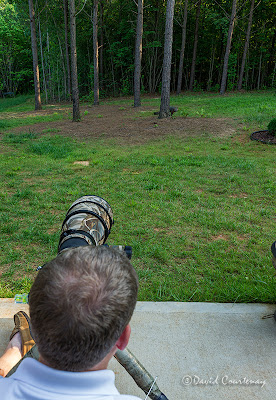 One night i set my D3s up on a tripod so that it shot over my head to give you a view of me shooting the fox, The wide angle makes the distance between myself and the fox look bigger than it is and is actually around 20-25 feet
The wildlife high light of the week for me was sitting in my screened porch late last night (Sunday) i could hear a commotion in the nearby tree and saw a bird fly out of it, The noise was nothing i could identify and then another bird flew out and landed just above my head on the guttering, A third bird flew and then the bird above me followed it, They were very small owls, About 10 minutes later i took my dog out into the front garden and could again hear the owls nearby, I looked up into the tree and could seem them clearly but as silhouettes, I checked my bird guide and would say that they were  Northern Saw-Whet Owls by there call, I am guessing it was an adult and 2 young or both adults and 1 young, Either way great to have around the house, Strangest birds in the garden this week were 2 belted kingfishers which flew around the garden before landing on my neighbors roof and then flying off, Last night we also listened to a distant Barred Owl and for the last couple of weeks have had a Whip Poor Will calling in the woodland behind my house which looks like a night-jar and extremely difficult to see